Lawmakers dismiss Empower Texans as irrelevant, but the group has the Texas House reeling again 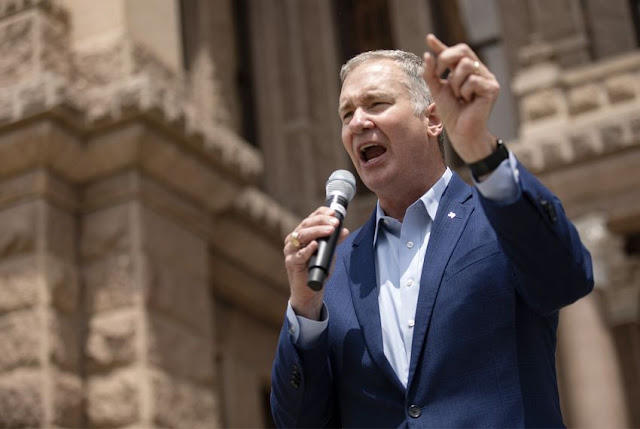 It was not a good 2019 legislative session for the hardline conservative group Empower Texans. Ignored on its signature issue of property tax cuts and denied credentials for employees of its affiliated news website, Texas Scorecard, to sit at the press table in the Texas House, it was ultimately labeled, by the mainstream press welcome at that table, irrelevant and toothless.

The activist group would never be satisfied, House Speaker Dennis Bonnen told reporters at the close of the session, “and I sure as hell am not going to waste my time trying.”

But it was less than two months before the group shouldered its way back into the headlines. Empower Texans CEO Michael Quinn Sullivan claimed in a bombshell blog post last week that in a June 12 meeting, Bonnen had dangled those long-denied media credentials in exchange for the group’s targeting 10 fellow Republicans — official tit for political tat. Bonnen denied that he had targeted any member of his chamber; Sullivan shot back that he has a recording of the meeting and, starting late Wednesday night, made it available to a select group of lawmakers.

Those claims — as yet unproven — were shocking, even unethical. But for some, the fact that Sullivan had even made it into a meeting at the speaker’s office was startling enough. Bonnen had pledged to protect even Democratic incumbents in his chamber, but here he was welcoming into the speaker’s office a political bomb thrower who has made a career of taking down Republicans he considers insufficiently conservative.

Empower Texans, a Tea Party-aligned group founded in 2006 and flooded with oil money from Midland’s Tim Dunn, has long had a reputation for using hardline tactics to achieve controversial ends. The organization is a tangle of political action committee, news outlet and lobbying firm; its tentacles, whether lawmakers like it or not, have considerable reach.

If difficult to please, Empower Texans is perhaps easier to ignore while lawmakers govern.

But the group and its well of oil money are harder to sideline when campaign season begins.

“They played a very small, if nonexistent role in the last session, and that’s one of the tragedies of all this: Singlehandedly, they’ve been given new life in this story,” said former state Rep. Jim Keffer, a moderate Republican who became a target of the group.

In the 2018 election cycle, candidates and other PACs reported receiving some $4.7 million from the Empower Texans PAC. That year, few of those shots proved fatal.

Nevertheless, being on the wrong side of the group’s formidable political action committee in a primary is “very scary,” Keffer said.

“It’s very concerning,” he added. “They make up stories that you think are crazy, but they can write it in a way where it sounds plausible. All of a sudden, you’re defending complete lies, and you can’t believe you’re even having to do it — and having to raise money to meet their money.”

Empower Texans, which did not return a request for comment on this story, bills itself as a service organization keeping an eye on government so you don’t have to; its yardstick is always “the taxpayer.”

“We empower taxpayers to advocate for good governance and hold their elected officials accountable,” its website reports.

Those accountability efforts are perhaps most visible in the group’s Fiscal Responsibility Index. Lawmakers are warned about votes they will be graded on, then ranked on a 1-to-100 scale based on how “pro-taxpayer” or “anti-taxpayer” their records prove. This year, the group opposed the state’s two-year budget; it passed unanimously.

But bad scores can come back to bite vulnerable Republicans. The session ends and the cycle repeats — scorecards fuel campaign attacks funded by six-figure checks.

Lawmakers and political observers describe the group as willing to pursue its ends at any cost.

“I tend to think [Sullivan] and Tim Dunn think their cause is so justified that anything is justified to pursue it,” said former state Sen. Bob Deuell, a Republican who fell to an Empower Texans-backed primary challenger in 2014. “If you don’t agree with him on a certain issue, he’ll manipulate the scorecards to turn you into a liberal and go after you with Tim Dunn money.”

Even Bonnen himself, in an explanation to House Republicans last week as to why he met with Sullivan to begin with, leaned on the group’s ability to disrupt elections. “We attempted to explain how important it is for his organization to not engage against House Republicans in the upcoming March primaries because of the importance of the November general election cycle,” he said.

The group is not above using hardball tactics. It posed as a fictional state agency — the “Texas Ethics Disclosure Board” — in a questionably legal attempt to take down state Rep. Charlie Geren, a longtime adversary. (Geren still won reelection.) Sullivan has long claimed to be a journalist to justify work at the Capitol he insists is not lobbying. Empower Texans' money has paved the way to court, as well; Sullivan’s group has tangled with the Texas Ethics Commission several times and recently sued Geren for denying media credentials to two employees.

And many are dubious about the group’s honesty.

The organization took a shot at Bonnen at least once before, in the 2018 primaries. It poured $100,000 into the campaign of Damon Rambo, a “cowboy hat-wearing conservative activist” it said was an obvious choice over Bonnen, whose “record has been a mixed bag at best and it’s been on the decline.”

Bonnen barely blinked. He went on to win his primary by 50 percentage points and the speaker’s gavel unanimously.

This time, the group’s attack may be harder to face down. Many doubt Sullivan’s motives and even his methods — but it’s harder to doubt an audio recording. Three Republican lawmakers said they listened to the recording, and it backed up Sullivan’s account of events. The group has declined, so far, to release the audio in full or to allow members of the media to hear it, though Bonnen called on Sullivan to “release it in its entirety.” In the meantime, speculation is running rampant in Capitol circles.

Bonnen pushed aside Empower Texans' asks during the session. Will he be able to brush off the group’s accusations now?