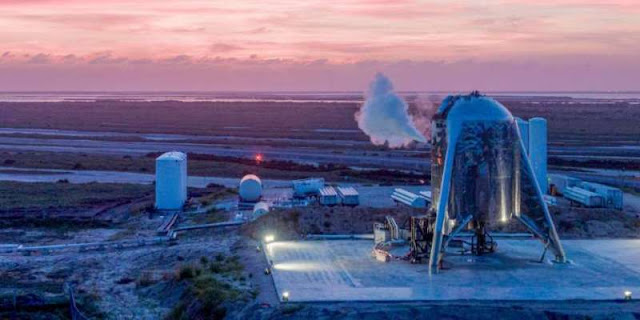 Law enforcement in a small Texas community have recommended that residents temporarily vacate their homes on Monday while Elon Musk’s SpaceX attempts an experimental launch of a Mars rocket prototype.

A public safety notice was issued to residents of Boca Chica, a town on the southern tip of Texas with houses within two miles of SpaceX's launch pad for the Starhopper rocket, Business Insider reported on Sunday.

A county sheriff reportedly went door-to-door on Saturday to deliver the notice to approximately 20 households, warning of possible shattered windows and “potential risk to health and safety.”

"There is a risk that a malfunction of the SpaceX vehicle during flight will create an overpressure event that can break windows. Therefore, in order to protect Public Health and Safety, it is recommended that you consider temporarily vacating yourself, other occupants, and pets, from the area during the Space Flight Activities,” the notice obtained by Business Insider read.

“At a minimum, you must exit your home or structure and be outside of any building on your property when you hear the police sirens which will be activated at the time of the Space Flight Activity to avoid or minimize the risk of injury."

Police will sound sirens roughly 10 minutes before the rocket’s liftoff, which is scheduled for Monday shortly after 4 p.m. CDT.

The sheriff's office and other local authorities did not immediately respond to requests for comment.

The Starhopper measures 60 feet and includes a single Raptor rocket engine. It is the initial prototype of a massive rocket called Starship, which could eventually take people and cargo to Mars, according to Business Insider.

Musk, the private space company's founder, confirmed on Twitter over the weekend that this would be the rocket's last launch.

This is the first time residents were reportedly encouraged leave their homes over safety concerns, according to Business Insider.

"I'm very angry. I feel like we are in a war zone running out of our houses so they won't collapse on us," Celia Johnson, a part-time resident since 1992, told the news outlet. "I feel like my hands are tied with no one to turn to for help. Our rights have been terminated by money, greed, and politics."

Another homeowner, Cheryl Stevens, said she was “shocked, angry and concerned” about the damage her house could possible sustain.

"Also bewildered as far as what to do that day. I don't know how to prepare for this. I plan to call the FAA [Federal Aviation Administration] on Monday to discuss the civil rights violations among other things,” she told Business Insider.

The police notice comes after an experimental launch for Starhopper last month resulted in brush fires that quickly spread to the nearby Las Palomas Wildlife Management Area, scorching about 100 acres.

The company told Business Insider that it is now coordinating with local agencies for launch plans and fire safety. It also reportedly installed five new remote control water cannons on its launchpad as a precaution.