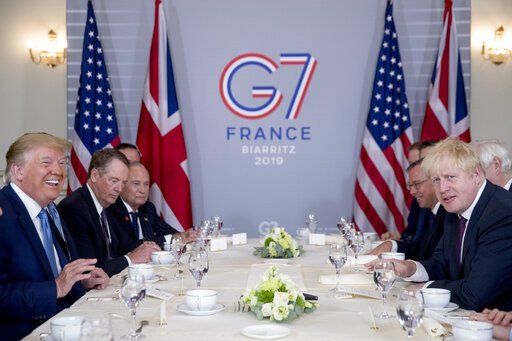 When the Group of 7 (G-7) Summit began in 1975, as the G-6 in the French town of Rambouillet, it convened initially to enable major Western democracies to address common economic challenges — boosting mutual growth and avoiding protectionism.

This past weekend, the 44th of these annual summits, held again in France, produced a cocktail of confusion, distraction and division. It also produced a few (potentially) positive surprises. And it left Western unity weaker, and key democracies without a clear sense of direction on crucial issues.

President Gerald Ford, one of the founders of the G-7 process, saw the meetings as opportunities to exert American leadership to strengthen unity among Western democracies and mobilize their support for U.S. economic and foreign policy objectives. He understood that if America were to successfully rebound from the recession it faced, then the worst since World War II, it needed to support U.S. trade partners in their recovery efforts.

In every summit, despite sharp differences and often heated discussions, the shared underlying goal was to advance policies supporting the common good — recognizing that prosperity was a positive-sum endeavor, that the economic growth of these economies was mutually reinforcing, that protectionism would damage that growth. And, at every one, the U.S. president, even when others strongly disagreed with some of his policies, was considered the leader of not only the free world but also the effort to forge strategies that reinforced the liberal, free-market economic order, because that bolstered collective prosperity and mutually beneficial political ties.

Few of these summits produced dramatic breakthroughs. Several produced very little. Yet, a few forged important, collective economic and foreign policy strategies, such as working together to stimulate growth, reducing oil dependence on the Middle East, cutting sources of funding to terrorists and increasing support for HIV/AIDS research. These results reinforced the benefits of political and economic cooperation, and underscored the importance of American leadership.

Just before this meeting, European Council President Donald Tusk called it “a difficult test of the unity and solidarity of the free world and its leaders” and expressed fear that “this may be the last moment to restore our political community.” It is painfully clear that it did not do much to strengthen free-world unity and solidarity. Whether our political community can be restored remains to be seen — but that is not likely in the short term.

French President Emmanuel Macron wisely sought to downplay expectations. To avoid the ill will surrounding last summit’s communique — President Trump ordered U.S. officials not to sign it — Macron dispensed with writing one, calling it “pointless.” This is the first time in the G-7’s history that such a thing has occurred. What matters most, however, is not the absence of what often is a barely read piece of paper but, rather, the absence of fundamental consensus on key issues, which most communiques reflect.

On the (potentially) positive side, and the biggest surprise of the summit, President Macron — following the drop-in visit of Iranian Foreign Minister Javad Zarif — volunteered to set up a meeting between President Trump and Iranian President Hassan Rouhani. President Trump seemed open but, understandably, with conditions. This could be the beginning of a historic turn in U.S.-Iran relations. If so, this will be one of the most consequential summits. But much work will be required to determine whether it will happen or, if so, will lead to genuine progress.

Also in the “surprise” category was President Trump’s announcement that “China called last night ... and said ‘let’s get back to the table’” and that he thought the U.S. and China “were going to make a deal.” This produced a spurt of near-term optimism but also confusion: A Chinese Foreign Office spokesman was unaware such a call took place, and major gaps remain between the two nations.

President Trump also announced that he and Japanese Prime Minister Shinzo Abe reached “agreement in principle” on a trade deal that would, inter alia, boost American agricultural sales and avoid new U.S. tariffs on Japanese autos. Japan was more circumspect, emphasizing that more work needs to be done. Agreements in principle do not always turn out to be agreements in substance, but if this materializes, kudos to both leaders.

The broader meeting was characterized by disputes and diversions. A collective effort to boost a flagging global economy did not emerge.

Instead there was acrimonious discussion over whether Russia, ousted from the G-7 in 2014 after its annexation of Crimea, should be reinstated. President Trump pressed for it, supported only by Italy. Most leaders were opposed because they believe this forum should reflect common values that Russia does not share. There was disagreement over how to deal with Iran; all leaders but one supported continuation of the U.S.-abandoned nuclear agreement. Deep differences on climate change resurfaced, as last year, although there was at least minimalist agreement — to provide at least $22 million to fight fires in the Amazon rainforest. And the U.S. and Japan clashed over whether recent North Korean missile tests violated U.N. agreements.

Several countries reportedly agreed with the U.S. on the need to seek changes in China’s policies on intellectual property and trade secrets — and to press for a level playing field for investment — but there was no common strategy on how to achieve this. Many of these countries see increased trade with China as helping them to reverse their economic downturns. Not surprisingly, G-7 countries subject to U.S. steel and aluminum tariffs, or to threats of auto tariffs, did not support America’s escalating tariff strategy. U.K. Prime Minister Boris Johnson seemed to reflect the consensus: “We don’t like tariffs on the whole.”

Despite a messy, often frustrating three days, the G-7 continues to have considerable value, symbolically and substantively. If the world economy goes into recession, a new financial crisis breaks out, a trade or currency war emerges or our countries face some other threat, this structure still can provide a framework for achieving solutions. To give up on it now, or allow it to deteriorate into confrontation and division, concedes a point to those who seek to undermine the architecture of Western cooperation. This would be an enormous setback.

This legacy from those like President Ford and his counterparts in Europe, Japan and Canada — who understood the value of Western cohesion and constructive U.S. international leadership — must not be undermined by those who do not attach importance to it or seek to weaken it. Someday they (or their successors) might appreciate it a lot more and Western democracies once again might find it an important instrument to underpin their prosperity, values and collective strength.