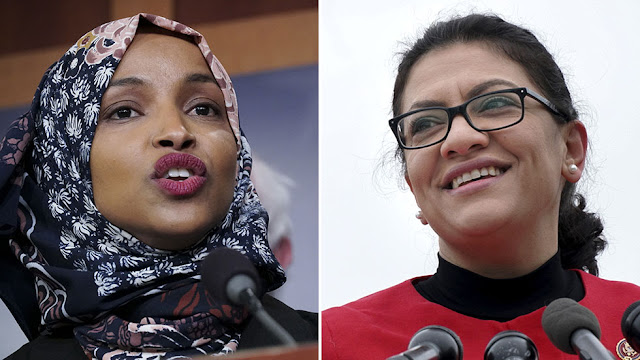 Israel on Thursday announced that it would deny Reps. Ilhan Omar (D-Minn.) and Rashida Tlaib (D-Mich.) entry during an upcoming overseas trip, citing the lawmakers' past comments critical of the country.

The decision was announced moments after President Trump tweeted that it would show "great weakness" for Israel to allow the two congresswomen into the country, calling them a “disgrace.”

The president has been an outspoken critic of both Omar and Tlaib, who last year became the first two Muslim women elected to Congress. But encouraging a foreign ally to deny entry to two elected U.S. officials marked a significant escalation and break with diplomatic norms.

Deputy Israeli Foreign Minister Tzipi Hotovely said the country would not “allow those who deny our right to exist in this world to enter,” The Times of Israel reported, citing a broadcast interview. Hotovely called it a “very justified decision.”

It’s unclear when Israeli officials made the final decision or whether it was affected by Trump’s tweet. News of the decision came roughly an hour after Trump tweeted.

Israeli Prime Minister Benjamin Netanyahu issued a lengthy statement later Thursday standing by the decision and disputing accusations that rejecting Omar and Tlaib entry would cause a broader rift in U.S.-Israeli relations.

He cited Israeli law that prohibits entry into the country for individuals who support a boycott of Israel.

“The two-member congressional visitation plan shows that their intent is to hurt Israel and increase its unrest against it,” Netanyahu asserted in a statement.

The prime minister added that if Tlaib filed a request to see her family members in the West Bank, Israel would consider granting her access on humanitarian grounds.

Reports surfaced Wednesday and earlier Thursday that the Israeli government was likely to bar Omar and Tlaib from visiting the country, despite warnings from Democrats that such a move would be unprecedented. It marks a reversal from last month, when Israeli Ambassador to the U.S. Ron Dermer said that the Israeli government would not deny entry to members of Congress.

Dozens of lawmakers participated in a congressional delegation to Israel last week, during which House Majority Leader Steny Hoyer (D-Md.) and Minority Leader Kevin McCarthy (R-Calif.) said the congresswomen should be allowed to visit the country.

“I think it would be helpful for anyone that has an opinion to come,” McCarthy was quoted as saying by the Times of Israel at a press conference in Jerusalem on Sunday.

The congresswomen have supported Palestinian rights and backed the boycott, divestment and sanctions (BDS) movement against Israel. Both have been accused by other members of Congress of using anti-Semitic language, but leaders of both parties had said they should be allowed to visit Israel.

“It would show great weakness if Israel allowed Rep. Omar and Rep.Tlaib to visit. They hate Israel & all Jewish people, & there is nothing that can be said or done to change their minds,” Trump tweeted Thursday morning. “Minnesota and Michigan will have a hard time putting them back in office. They are a disgrace!”

The congresswomen’s visit was scheduled to take place Aug. 18–22, and they were due to visit the historic site in Jerusalem known as the Temple Mount to Jewish people and as the Haram al-Sharif to Muslims.

The president has repeatedly lashed out at Omar, accusing her of hating Israel and the Jewish people. After tweeting last month that she and three other progressive congresswomen should “go back” to where they came from, a rally crowd in North Carolina chanted “send her back” about Omar, who came to the U.S. as a refugee from Somalia.

The congresswoman has come under fire since taking office in January for using anti-Semitic tropes. She drew criticism when she suggested lawmakers support Israel because of money from lobbyists and was rebuked again when she claimed those who back the territory harbor “dual loyalty.”

Tlaib, who is Palestinian American, has supported the BDS movement and drew backlash from conservatives earlier this year for comments about the Holocaust when she said it gave her a “calming feeling” to think of persecuted Jews finding safe haven in Israel.

“This action is antithetical to our countries’ shared democratic values that are the basis for a strong, bipartisan alliance,” House Majority Whip Jim Clyburn (D-S.C.) tweeted. “Disagreements among our citizens — elected officials in particular — must be addressed through engagement, not ostracism.”

Left-leaning Jewish advocacy group J Street released a statement calling the decision “dangerous, unacceptable and wrong” and demanding it be reversed immediately, warning it otherwise would do damage to the U.S.-Israel relationship.

“We may disagree with the views that the members hold on such questions as BDS or with Rep. Tlaib on the two-state solution, but the right approach for a state that values democracy is to welcome criticism and debate, not to shut it down,” J Street President Jeremy Ben-Ami said.

“The fact that President Trump has already tweeted out his own call for these representatives to be denied entry illustrates that this decision is motivated purely by politics and ideology — not by the interests of the State of Israel.”