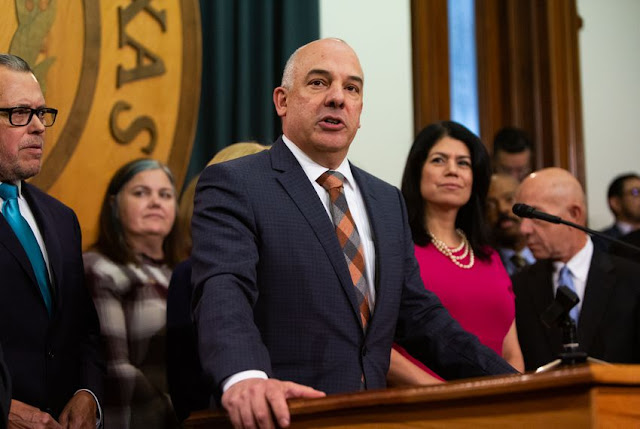 Texas House Democrats are joining calls for a hardline conservative activist to release the entire recording of his meeting with Speaker Dennis Bonnen — which could clear up allegations that Bonnen planned to politically target fellow Republicans.

“House Democrats agree with the Speaker and others that the recording should be released in its entirety,” state Rep. Chris Turner, a Grand Prairie Democrat who chairs the caucus, said in a statement Friday. “Complete transparency is paramount; allowing select political insiders to hear it in private isn’t going to cut it.”

Last week, Michael Quinn Sullivan accused Bonnen, a Republican, and one of his top lieutenants of offering Sullivan’s group media access to the lower chamber if his organization Empower Texans politically targeted 10 GOP members in the 2020 primaries. Bonnen left the room during a June 12 meeting, Sullivan said, and state Rep. Dustin Burrows, a Lubbock Republican who chairs the House GOP Caucus, listed off the 10 members.

Sullivan later revealed he had secretly recorded the meeting, and said he would allow certain Republicans to listen to it. He has not publicly released the recording.

Bonnen has repeatedly given a different account of the meeting — and has called on Sullivan to release his entire recording. Burrows has not publicly responded since Sullivan first made his allegations.

Friday’s caucus statement marks the Democratic Party’s first official response to accusations that have thrown the lower chamber into chaos. On Wednesday, three House Republicans went public with details of the recording after they listened to it, and said that the audio could be detrimental to the speaker and the state party ahead of the 2020 election cycle. Since then though, the vast majority of the chamber’s Republicans have remained silent on the matter.

A number of top Bonnen allies — including state Rep. Joe Moody, an El Paso Democrat who serves as speaker pro tempore — have joined the speaker in calling for Sullivan to release the recording. Some have also publicly expressed skepticism about whether it was even fabricated.