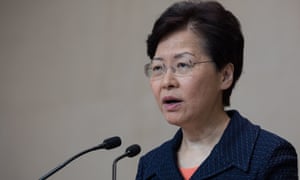 Hong Kong's leader called for an open dialogue between the city's government and protesters on Tuesday following another weekend of massive protests in the city.

The city's chief executive, Carrie Lam, said Tuesday in a statement that protesters involved in non-violent demonstrations such as the one that took place Sunday amid a torrential rainstorm would be welcome to sit down and discuss issues with officials, according to news reports. Sunday's protest was reportedly attended by 1.7 million people.

“I sincerely hope that this was the beginning of society returning to peace and staying away from violence,” she said, according to Reuters.

“We will immediately start the work to establish a platform for dialogue. This dialogue, I hope, will be based on a mutual understanding and respect and find a way out for today’s Hong Kong," Lam added.

The Associated Press reported that members of the Civil Human Rights Front, a Hong Kong-based human rights organization, rejected Lam's offer as an unserious attempt to end the protests, pointing out that the greater protest movement is leaderless.

“We do not trust Carrie Lam, we do not trust her lies,” said the group's vice-convenor, according to the AP. “She is fully aware there is no leader, this is a leaderless movement. What does she suggest?”

Protests initially erupted in the city earlier this year over a bill, now dead, that would have allowed Hong Kong citizens to be extradited to mainland China for criminal trials. Protests in recent weeks have focused around police brutality and the government's response to previous demonstrations.

Lam reiterated Tuesday that no plans were in the works to revive the legislation.

“The bill is dead,” she said at a press conference, according to Reuters. “There is no plan to revive the bill, especially in light of the public concerns.”