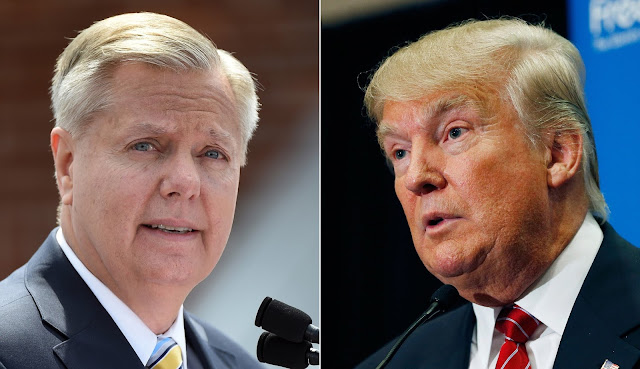 Senate Judiciary Committee Chairman Lindsey Graham (R-S.C.) said on Monday that he will introduce bipartisan legislation encouraging states to create "red flag" laws and that President Trump is "very supportive" of the idea.

Graham, in a statement, said he has reached a deal with Sen. Richard Blumenthal (D-Conn.) on a bill that would start a federal grant program to help and encourage states to create " 'red flag' protection order" laws, which are meant to make it easier for law enforcement to identify mentally ill people who should be banned from purchasing guns.

“These grants will be given to law enforcement so they can hire and consult with mental health professionals to better determine which cases need to be acted upon. This grant program also requires robust due process and judicial review. It does allow for quick action," Graham said in the statement.

He added that he spoke with Trump earlier Monday "about this proposal and he seems very supportive."

The forthcoming legislation comes after a gunman on Saturday killed more than 20 people and wounded dozens more in an attack at a Walmart in El Paso, Texas, on Saturday. Less than a day later, at least nine people were killed and more than two dozen were injured in a Dayton, Ohio, shooting. The two shootings are not believed to be linked.

Trump highlighted "red flag" legislation during his speech from the White House on Monday as one of the proposals he would support after the two shootings. He did not discuss gun background check proposals, which are being pushed for by Democrats.

Graham added in his statement on Monday that he would introduce the bill with Blumenthal in the "very near future," adding that he hopes senators from both parties "will join us to finally move forward in the effort to keep guns out of the hands of dangerous people.”

“I appreciate President Trump’s strong statement rejecting hate and white supremacist ideology, urging us all to reject a culture of violence, as well as a call to action on multiple fronts," Graham added.

Blumenthal added in a statement that he and Graham had been in negotiation since the previous Congress and had reached a deal on a "framework" for legislation.

"We will be finalizing the details for this bill and reaching out to colleagues on both sides of the aisle in the coming days and weeks. I look forward to introducing final legislation with Senator Graham in the very near future," Blumenthal said.

Judiciary Committee ranking member Dianne Feinstein (D-Calif.) wrote a letter to Graham on Monday asking for a vote on her bill.

"As you know, this bill creates grants to incentivize states into creating extreme-risk laws. ...I am glad that we agree that providing incentives to states is the strongest way to enact these measures," Feinstein wrote.

"Given the President’s statement in support for these laws today, I again request that you put the Extreme Risk Protection Order Act on the agenda to be considered as soon as possible," she added.