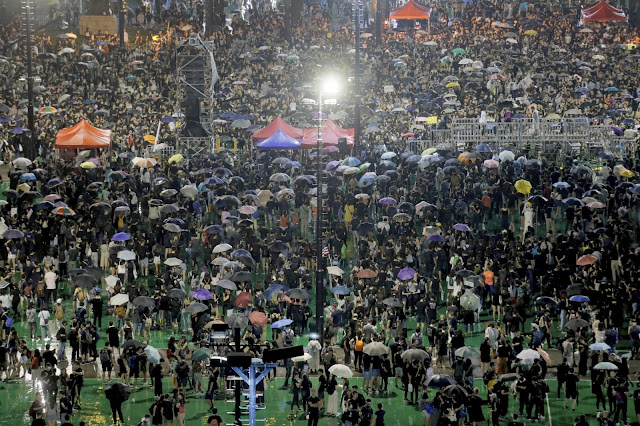 Facebook and Twitter on Monday both announced the discovery of a disinformation campaign being conducted on their platforms by Chinese-backed groups trying to undermine the recent pro-democracy protests in Hong Kong.

Twitter wrote in a post that it had identified 936 accounts originating in China that were “deliberately and specifically attempting to sow political discord in Hong Kong, including undermining the legitimacy and political positions of the protest movement on the ground.”

Twitter said it had "reliable evidence" to believe this was a state-backed coordinated operation.

As a result, Twitter will no longer accept advertising from state-controlled media outlets, specifically those that are either financially or editorially controlled by a nation-state.

“We want to protect healthy discourse and open conversation,” Twitter wrote. “To that end, we believe that there is a difference between engaging in conversation with accounts you choose to follow and the content you see from advertisers in your Twitter experience which may be from accounts you're not currently following. We have policies for both but we have higher standards for our advertisers.”

Facebook wrote in a separate post that based on Twitter’s findings, it conducted an internal investigation into what the company described as “coordinated inauthentic behavior in the region.”

Facebook removed seven pages, three groups, and five accounts from the platform stemming from the investigation. More than 15,000 Facebook users were estimated to follow the Chinese-backed pages that were removed, while around 2,200 accounts were members of at least one of the groups.

"We are making progress rooting out this abuse, but as we’ve said before, it’s an ongoing challenge," Facebook wrote. "We’re committed to continually improving to stay ahead. That means building better technology, hiring more people and working more closely with law enforcement, security experts and other companies."

Twitter said the accounts removed on Monday were the most “active” accounts in the disinformation campaign, but that around 200,000 accounts were “proactively suspended” before they were able to become “substantially active.”

The accounts were all suspended for violations against Twitter’s platform manipulation policies, with the company pointing to violations around spam content, coordinated activity, fake accounts, attributed activity and efforts to evade Twitter bans. Despite Twitter being blocked in China, the company wrote that many accounts there accessed the platform through virtual private networks.

All of the accounts suspended have been archived, totaling to what Twitter described as “the largest of its kind in the industry.”

Hong Kong has seen weeks of protests by demonstrators calling for political reforms and more democracy as well as violent clashes between protesters and law enforcement.