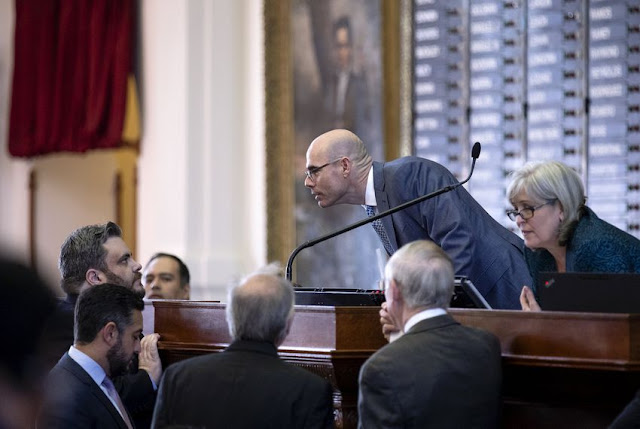 Texas House Speaker Dennis Bonnen isn’t cooked, yet — but the water is boiling.

The compact between a speaker and the members of the Texas House who elect him goes like this: Protect the members from the outside world (and from fratricidal colleagues), and in return, you get the title, the fancy corner office, the apartment in the state Capitol, and the gavel and the dais when the Legislature is in session.

Protection for power. It’s not a complicated transaction.

And the threat to that compact is why Bonnen is facing a crisis seven months after winning the job. Accused of selling out 10 of his fellow Republicans to a political operative, he’s now pitting his word with that activist threatening to make public a recording of their conversation.

If you’ve been following the reporting on this from the Tribune’s Cassandra Pollock, you know that Michael Quinn Sullivan of Empower Texans alleges Bonnen, along with state Rep. Dustin Burrows, who heads the House Republican Caucus, offered to give his organization long-denied news media access to the House floor and asked Sullivan to oppose 10 Republican representatives in next year’s elections.

Bonnen has denied that. Burrows has been silent. Sullivan has started playing the recording in private sessions with members of the House and others. The first of those — Republican Reps. Steve Toth of The Woodlands and Travis Clardy of Nacogdoches — emerged from a listening session vouching for Sullivan’s version of the story. Bonnen, still denying Sullivan’s version, responded by saying the recording should be released to everyone — in full.

So, again: This isn’t a death notice. But it’s clearly a crisis for Bonnen and Burrows, who stand accused of violating that grand bargain, of not protecting members of the House from outside attacks. Worse, they’re accused of trying to commission outside attacks against members.

What Bonnen has been telling members since Sullivan busted this open last week plays into this as well. As more members hear the recording — assuming they’re hearing a clean and complete rendition — they’ll compare that to what Bonnen has been telling them for the last week. If the stories don’t match, the speaker — this is the gentlest way of putting it — will have to explain the discrepancies.

In a trust-based relationship between a leader and the followers who elected him, that’s perilous.

A speaker who doesn’t have the trust of his own members isn’t in a secure spot. And one caught working directly against those members is cooked.

The allegations against Bonnen and Burrows have rapidly gained momentum over the last week. Members are chattering among themselves, wondering whom to believe, what actually happened, whether they’ve got a leader they can trust and what it means, personally, to each of them.

It’s inside baseball. Former House Speaker Pete Laney once told a reporter that speakers are usually in political trouble if more than 10% of the voters can name them. It’s a tempest in a teapot, but it’s an important teapot: A speaker of the Texas House is, along with the governor and the lieutenant governor, one of the three elected officials with the most influence over the state’s laws and spending.

The Bonnen-Burrows-Sullivan commotion is potentially troubling for Texas Republicans entering an election year with factions threatening party unity. Sullivan’s only known report on this to anyone outside the House was to James Dickey, the chairman of the Texas GOP. A this-favor-for-that-political-help offer could interest ethics police or even criminal prosecutors. And a Bonnen collapse could engage the House in a speaker race — a contest among the 150 members for someone to replace Bonnen, if it comes to that.

It hasn’t come to that. Bonnen remains standing, demanding a full and public copy of the recording. Only a couple of members have heard it, taking another step toward discovery of who they believe is telling them the truth.

It is still possible, in other words, that this will blow over and that Bonnen will remain in the post he won in the first weeks of this year.

But it sure is hot in here, isn’t it?