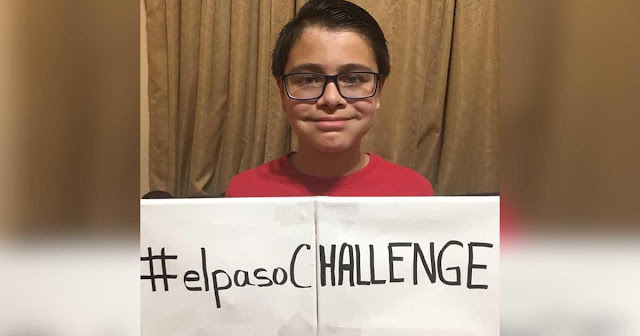 An 11-year-old boy in El Paso, Texas, is challenging his fellow community members to honor the lives lost in Saturday's mass shooting by doing good deeds.

“This will show the world that people from El Paso, Texas are kind and care for each other,” Ruben Martinez, the sixth grader behind the challenge, wrote in a paper shared online.

The boy's mother, Rose Gandarilla, shared her son’s “El Paso Challenge” on Facebook Sunday, a day after a gunman opened fire at a Texas Walmart, killing more than 20 people.
“He challenges each El Pasoan to do 20 good deeds. One in honor of each person killed in yesterday’s shooting. Please share and let’s do this,” Gandarilla said in the post.

El Paso police said Monday that two more people had died from the shooting, bringing the total fatalities to 22.

Gandarilla’s post has been shared nearly 3,000 times as of Tuesday afternoon.

Gandarilla told CNN the idea came after her son told her he was scared to go shopping at stores and asked if they could use a delivery service instead.

"I explained to him that we could not live in fear and that people in our community are caring and loving. I told him to try and think of something he could do to make El Paso a little better,” she told the outlet.

That led Martinez to come up with the challenge.

Some suggestions Martinez offers to honor the 22 lost lives are mowing someone’s lawn, visiting a nursing home, paying for someone’s lunch or dinner, donating to families in need or writing someone a letter to tell them how great they are.

He also encourages others to share the challenge by putting up posters, passing out flyers and sharing it on Facebook.

Gandarilla told CNN her son did his first act of kindness Sunday night, by delivering dinner to first responders.

"He seems to be doing better and says that hopefully, the world will be a better place with all these random acts of kindness,” she said.