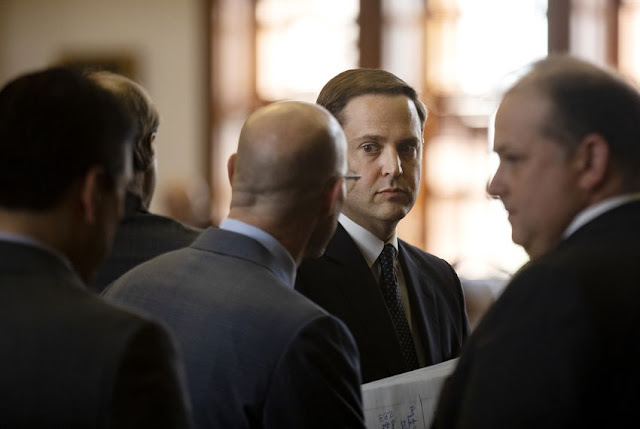 State Rep. Dustin Burrows of Lubbock has resigned as chair of the Texas House GOP Caucus, according to two people familiar with the matter. Burrows’ departure comes amid allegations that he and House Speaker Dennis Bonnen planned to politically target members from their own party in the 2020 primaries — and it marks the largest fallout yet since the accusations surfaced.

Burrows has served in the House since 2015. His resignation is expected to be announced to House Republicans sometime Friday. State Rep. Stephanie Klick of Fort Worth, who serves as vice chair of the caucus, will be elevated to chair.

Burrows has not yet publicly responded to the accusations made by Michael Quinn Sullivan, a hardline conservative activist who heads Empower Texans. Over the past few weeks, a number of House Republicans have privately expressed frustration that their caucus leader was largely remaining silent on the accusations made against him.

In July, Sullivan accused Bonnen, an Angleton Republican, and Burrows of offering Empower Texans media access to the House in 2021 if the group targeted 10 GOP members in 2020. According to Sullivan, Bonnen left the room during a June 12 meeting before Burrows listed off the 10 members. Sullivan has since revealed he secretly recorded the meeting, and although he hasn't yet released it publicly, various Republicans who have listened to it say the audio largely confirms Sullivan's allegations.

Bonnen initially pushed back against the allegations, but he has since apologized for saying “terrible things” in the meeting.

Since Sullivan first made his allegations, there’s been uncertainty among House members over whether Burrows violated caucus bylaws. A new section in the bylaws, as The Texan first reported, states that caucus members who campaign or financially support a candidate running against another member could face a fine, suspension or revocation of caucus membership.

Caucus members must elect a new vice chair of the caucus within 30 days, according to caucus bylaws. State Rep. Dan Huberty of Houston serves as the caucus’ treasurer. And state Rep. Craig Goldman of Fort Worth serves as secretary.

In a statement, Bonnen said that Burrows "was a strong leader for the caucus." He added, "I respect his decision and I remain committed to strengthening our majority."

Meanwhile, the Texas Rangers have launched an "initial inquiry" into the allegations surrounding that June meeting of Sullivan, Bonnen and Burrows. The issue was punted to them by the House General Investigating Committee earlier this week.