Divisions within Democrat party of full display during presidential debate 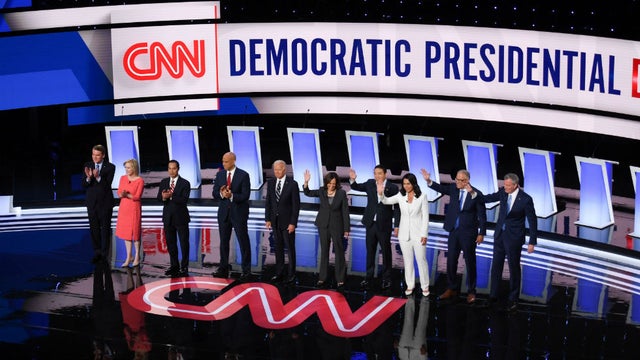 A bitter brawl erupted during the second night of Democratic presidential debates on Wednesday as nearly half of the party’s candidates unleashed attacks on one another’s political records and policy proposals.

Going into the debate, much of the focus was on another potential clash between former Vice President Joe Biden and Sen. Kamala Harris (D-Calif.), two of the field’s top-tier candidates who butted heads in the first round of debates last month.

Instead, almost all of the 10 candidates went on the attack, turning weeks of pent-up frustration and simmering tensions on members of their own party.

Still, it was Biden, the contest’s current front-runner, who emerged as the top target of the night, taking heat from several of his rivals, including Sen. Cory Booker (D-N.J.), who grilled him over his record on criminal justice and the U.S. prison system.

“The vice president has said since the 1970s, every crime bill, major and minor, has had his name on it,” Booker said. “The house was set on fire and you claimed responsibility for those laws, and you can’t just come out with a plan to put out that fire.”

Biden countered with a challenge to Booker’s own record, raising issues that bedeviled the Newark, N.J., Police Department during the now-senator’s tenure as mayor. That drew a testy response from Booker, who said he welcomed a conversation about the candidate’s records.

“Mr. Vice President, there's a saying in my community: You're dipping into the Kool-Aid and you don't even know the flavor,” Booker said.

The tone of the debate turned confrontational almost immediately after Harris was asked about Biden’s criticism of her position on "Medicare for All" and what he has called her “every-which-way approach” to health care policy.
Harris dismissed the remarks, saying that the former vice president’s campaign was “probably confused because they haven’t read” her proposal.

“This is the single most important issue facing the public and to be very blunt and to be very straightforward, you can’t beat Trump with double talk on this plan,” Biden shot back.

As the debate raged on, the candidates touched off a sort-of circular firing squad.

“You want to be president of the United States, you need to be able to answer the tough questions,” de Blasio said. “I guarantee you, if you’re debating Donald Trump, he’s not going to let you off the hook.”

For several underdog candidates, the Wednesday debate, the second of two featuring 10 candidates each, was an opportunity to spur their fundraising and poll numbers by taking on the primary contest’s top-tier candidates, Biden and Harris.

Seven of the candidates on stage Wednesday night have not yet met the steeper requirements to qualify for the third and fourth set of primary debates in September and October, and Harris’s successful confrontation with Biden last month proved that attacking the front-runner could give a campaign a shot of much-needed momentum.

Harris, meanwhile, appeared eager to extend her feud with Biden, conscious of the boost to her poll standings that her last confrontation with him delivered. When Gabbard criticized Harris’s health care proposal, the California senator addressed the remarks only briefly before shifting her attention to Biden.

“I’m going to go back to Vice President Biden,” she said.

Biden was likewise eager to prove that he could keep pace with Harris after a lackluster performance in their first debate in June. And though he was tongue-tied at times, he landed several attacks on Harris.

Some candidates appeared frustrated with the divisions on display on Wednesday. Booker, at one point, said that the intraparty dispute over Medicare for All was playing into Trump’s hands by drawing focus away from the president's own efforts to limit health care access.

“Let me just say that the person that’s enjoying this debate most right now is Donald Trump, as we pit Democrats against each other, while he is working right now to take away Americans’ health care,” Booker said.