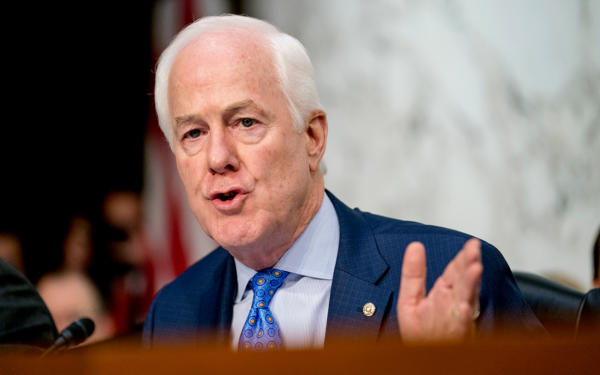 A slew of Democrats are lining up to challenge Sen. John Cornyn (R) in Texas in 2020, showcasing the party’s optimism of flipping a Senate seat in the historically red state despite the likely uphill climb.

Seven Democrats have entered the primary, and one more could join in a state that has not elected a Democratic senator in more than three decades. Among the candidates are military veteran MJ Hegar, who narrowly lost a House race last year, and Houston City Councilwoman Amanda Edwards.

The optimism is being driven by trends that appear to favor Democrats, including a growing diversity and a surge in transplants from neighboring blue states like California. Polls also show some signs of weakness for Cornyn as well as President Trump, further raising hopes of a win in a state that has not elected a Democrat to the Senate since Lloyd Bentsen in 1988.

But taking out Cornyn, a three-term senator, will not be easy. Republicans view the large primary field as an advantage, arguing a potentially contentious primary could bruise the future candidate and use up money ahead of the general election.

Though many of the Democratic candidates believe they can emulate O'Rourke's close race last year, Cornyn, a longtime staple in Texas Republican politics, is widely seen as a far more formidable opponent than Cruz last year.

The Cook Political Report rates the seat as “solid Republican.”

“They’re going to have to spend so much time and energy headed through the early part of next year not focused on Sen. Cornyn, but focused on each other,” David Polyansky, former chief of staff and adviser to Cruz, said in an interview with The Hill.

“By the time May rolls around, they’re going to have a really short window to launch a statewide campaign that cleans up the carnage of not only a large but likely aggressive primary battle,” he continued.

Texas’s Asian population grew by 42 percent from 2010 to 2017, while its Hispanic and black population expanded by 18 and 16 percent, respectively.

The state’s white population only grew by 4 percent in that seven-year period.

Democrats argue that their Senate primary field reflects those changing demographics, making them likely to benefit from the state's growing diversity.

Other contenders include Edwards and Beaumont, Texas, NAACP Chairman Michael Cooper, who are both African American.

Former Texas Rep. Chris Bell (D) is also running, along with Hegar, who came within 3 points of defeating Rep. John Carter (R-Texas) in 2018 in her first political race.

“It shows you just how diverse Texas is. They represent the real Texas, whereas Cornyn represents the older version of Texas,” a Texas Democratic official said.

Meanwhile, the state's strong economy has attracted millions of new residents, many of them from California, a trend that is making the state bluer, according to strategists. One percent of the state of California, with a much more liberal population, has moved to Texas.

Partly because of these trends, four Texas House Republicans recently announced their retirement in a time span of less than two weeks, including Rep. Will Hurd, the only GOP African American in the lower chamber.

Democrats also point to what they say are a number of signs showing potential weaknesses for Cornyn as an incumbent.

An Emerson College–Dallas Morning News survey released earlier this month showed Cornyn with just a 37 percent job approval rating, while 31 percent said they disapproved. Another 33 percent of Texans said they were neutral or had no opinion on the senator.

“The problem with John Cornyn basically is he’s spent the last 20 years in Washington and he has nothing to show for it,” the party official said. “He basically climbed the Washington ladder.”

Turnout tends to increase in presidential election years, and many Republicans in red states are hoping to ride on the coattails of President Trump.

But Trump has shown some signs of weakness himself. Polls aggregated by RealClearPolitics showed former Vice President Joe Biden beating the president in 2020 and Trump at a virtual tie against Sen. Bernie Sanders (I-Vt.), though he leads other top Democratic contenders by several points.

Republicans are unfazed and point to Cornyn's strong record in Texas. A former attorney general, Cornyn won his last Senate race in 2014 by 27 points and has amassed a solid conservative record that has made him popular within the GOP in the state.

And though Trump has shown some signs of weakness, Republicans believe they will be able to portray any of Cornyn's challengers as a member of a party veering too far to the left.

“I like where our record is to run on better ... than what these Democrats, the national Democrats, as well as Democrats in the primary, are going to have to run on and answer to,” a Republican official close to the Cornyn campaign said, citing "Medicare for All" and the Green New Deal.

“I just don’t think these are ideas that are going to be favorable with Texas voters this time around,” he continued.

“No question last year’s election results where Congressman O’Rourke was able to come within less than 3 percent of Senator Cruz was an eye opener for a lot of people, and reinforced the message I have been delivering for over a year: that we needed to take seriously the responsibility to do the hard work necessary to earn every Texas voter’s vote,” Texas Republican Party Chairman James Dickey said.

Cornyn’s campaign is also going all out to build up his candidacy. The senator tapped John Jackson, who ran Gov. Greg Abbot’s (R) successful reelection campaign in 2018, in January. He also garnered early endorsements from Cruz and Lt. Gov. Dan Patrick (R) last December and has the strong support of Trump.

Critically as well, the Texas senator has $9 million cash on hand and raised more than $2.5 million during the last fundraising quarter.

That's far above any of his Democratic challengers: Hegar, who entered the race in April, brought in more than $1 million, bringing her total cash on hand to $595,000.

And none of the Democratic challengers so far has shown a similar star power to O'Rourke, who is struggling in the presidential race but remains popular in Texas.

When O'Rourke returned to El Paso, Texas, this month after a shooting that left more than 20 dead, the Houston Chronicle published an editorial titled, "Beto, come home. Texas needs you."

A recent poll reflected the challenges facing Cornyn's Democratic challengers. The Dallas Morning News–Emerson College poll earlier this month found that 19 percent of registered voters said they wanted “someone else” to challenge Cornyn, the most widely picked answer in the survey. Hegar came in second place, at 10 percent.