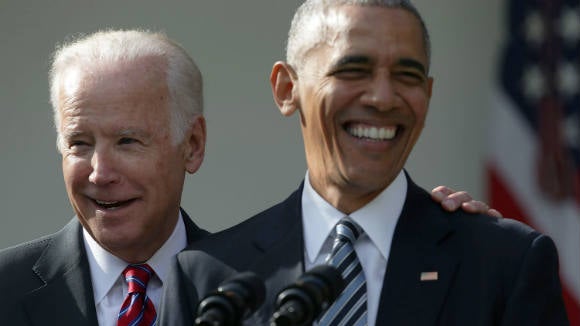 Former Vice President Joe Biden slammed other 2020 rivals for criticizing former President Obama's policies, telling reporters on Thursday that it was "bizarre" that the previous administration's actions were being compared to President Trump's.

"I was a little surprised at how much incoming there was about Barack, about the president," Biden said.

“I’m proud of having served him. I’m proud of the job he did. I don’t think there's anything he has to apologize for," he said.

Biden also strongly defended the Obama administration's record, while criticizing those who compared their policies on issues like immigration to President Trump's.

"He changed the dialogue, he changed the whole question, he changed what was going on. And the idea that somehow it’s comparable to what this guy is doing is absolutely bizarre," Biden said comparing Obama to Trump.

The strong defense of Obama came after some Democratic candidates appeared to criticize a number of policies under the Obama administration on Wednesday night, including on deportations and his signature health care law, the Affordable Care Act, also known as ObamaCare.

Though Obama remains broadly popular among Democrats some progressives have long argued for a new Democratic president willing to take bolder action.

The debate is most prominent over health care, where candidates like Sens. Elizabeth Warren (D-Mass.) and Bernie Sanders (I-Vt.) are pushing for a more comprehensive "Medicare for All", whereas Biden and other more centrist candidates are pushing to build on ObamaCare.

Obama's record on deportations and immigration also came under fire during the forum at a time when Trump has come under intense criticism for Democrats over his "zero tolerance" policy.

New York City Mayor de Blasio questioned Biden on whether he thought the 3 million deportations under the Obama administration were a good idea.

While Biden said he would not share details about his private conversations with Obama, Sen. Cory Booker interjected, saying he couldn't have it both ways.

“Mr. Vice President, you can’t have it both ways,” Booker said on Wednesday. “You invoke President Obama more than anybody in this campaign. You can’t do it when it’s convenient and then dodge it when it’s not.”

Biden has made a concerted to tout his ties to the former president, who is seen as one of the most popular figures within the Democratic Party.

Booker defended his criticism on Thursday, saying that he was still immensely loyal to Obama.

"The reality is we have a situation right now where the president is doing things to this country that are perverting our very values and ideals, and talking about what our plans would be, different from the previous president; different from the current president, is not a bad thing," Booker said.