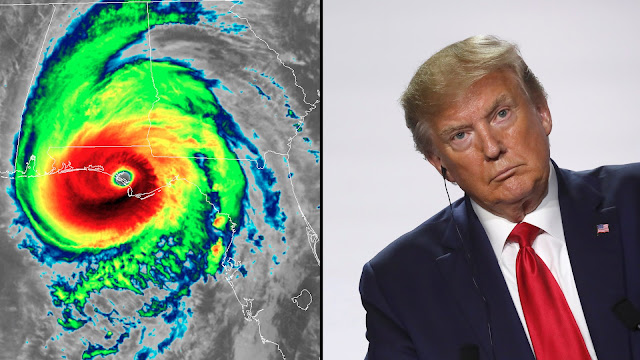 President Trump on Monday night doubled down on his criticism of a report that he floated dropping nuclear bombs into hurricanes to prevent them from hitting the U.S., calling it a "phony story."

"The Fake News is still trying to perpetuate the phony story that I wanted to use Nuclear weapons to blow up hurricanes before they reach shore. This is so ridiculous, never happened!" he tweeted upon his return from the Group of Seven (G-7) summit.

He also slammed the Axios article in a Monday morning tweet, writing: "The story by Axios that President Trump wanted to blow up large hurricanes with nuclear weapons prior to reaching shore is ridiculous."

"I never said this. Just more FAKE NEWS!" he added.

In response to Trump's initial criticism, reporter Jonathan Swan tweeted that he stands "by every word in the story."

"He said this in at least two meetings during the first year and a bit of the presidency, and one of the conversations was memorialized," Swan added.

Swan had reported for Axios that Trump suggested the idea during meetings with Homeland Security and national security officials. He cited sources who said they had heard the president's private remarks and been briefed on a National Security Council (NSC) memorandum in which they were recorded.

One source told the news outlet that the president said during the briefing: "I got it. I got it. Why don't we nuke them?"

"They start forming off the coast of Africa, as they're moving across the Atlantic, we drop a bomb inside the eye of the hurricane and it disrupts it. Why can't we do that?" the person reportedly paraphrased Trump as adding.

The 2017 NSC memo described a second such conversation, according to Axios, but a source briefed on it told the news outlet that it does not include the word "nuclear."