After botching one shot at peace, the Texas GOP establishment tries again 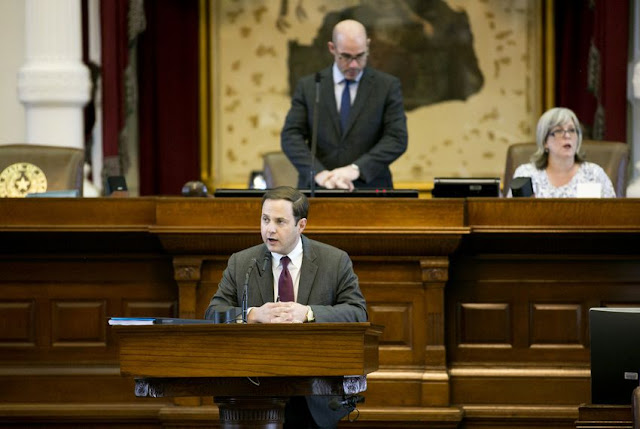 Gov. Greg Abbott’s Thursday morning endorsement of state Rep. Dustin Burrows of Lubbock is a signal that the Republican establishment in Texas is trying to close ranks in advance of the 2020 elections.

Burrows and House Speaker Dennis Bonnen met in June with a Republican activist who has since accused them of offering long-sought media passes to the House floor in return for help defeating 10 Republican House incumbents.

Bonnen has denied that allegation from Michael Quinn Sullivan, who heads a group called Empower Texans, a platform from which he regularly goads the state’s elected Republicans as insufficiently conservative.

And until he did a 15-minute interview with Chad Hasty on KFYO Radio in Lubbock on Thursday, Burrows had spent the last month in his own personal version of the federal witness protection program, studiously saying nothing publicly about the meeting. Sullivan made his accusations public four weeks ago, revealing a few days later that he had recorded the meeting. Since then, he has played the tape for a select group of legislators, party officials, consultants and activists, but he hasn’t made his recording available to the public.

Burrows’ emergence into the public eye included an announcement that he’ll seek another term and news of the Abbott endorsement. Asked if he had offered media credentials for writers affiliated with Sullivan’s organization, he said he had not. (Sullivan has written that Bonnen was the one who offered credentials, and Bonnen has denied that.) Burrows talked about the Texas Rangers’ investigation initiated this month by the House General Investigating Committee, said he hadn’t talked to investigators yet, and said their entrance into the situation takes it “out of politics’ hands.”

He also joined a chorus asking for “full unedited complete immediate release of the tapes,” a group that includes Abbott, Bonnen, Lt. Gov. Dan Patrick, a number of state legislators and the head of the state GOP.

“The idea that the people holding them somehow want to protect the Republican Party is honestly kind of laughable, given that, I think, if you look at their history, it’s really been not to help the Republican Party,” he said. “And so, I hope they’ll come out soon.”

That would give the GOP a chance to put this fiasco to bed. It’s clear they think it’s dangerous. Patrick said this week on the Mark Davis radio show in Dallas that Republicans  could lose some seats in the elections, if they don’t get this behind them. “We don't have to lose many seats to lose the House to the Democrats, and this could play a part in that.”

It has already stirred some local Republican groups, and the members of the House who elected Bonnen have split roughly into groups: A few have said the speaker should resign, a larger group has said — often via social media — that he should be forgiven. Most members have kept their traps shut, staying out of the limelight while they see how things play out.

They’re trying to hold it all together. Burrows pointed out what he called the “irony of things” — that he and Bonnen were trying to mend splits within the GOP in 2020.

“The reason that, you know, I got invited to go in the meeting, and the reason Mr. Sullivan wanted a meeting, was to discuss the importance of 2020, reflecting on 2018 elections and, you know, Ted Cruz nearly being defeated, that we lost a lot of judges, which I think is going to affect the judiciary, and we lost 12 good members of the Republican House,” Burrows told Hasty.

He said he and Bonnen implored Sullivan not to go after Republican incumbents. “That’s not what we want you to do. Let’s focus on 2020. We do not need to lose the House ahead of redistricting. But if you’re going to, why are you going after the conservatives that actually agree with you? Why are you going against all Republicans? Why aren’t you going the ones who disagree with you? You know, if that’s what you’ve got to do, do that.”

The discussion turned to the House’s defeat of legislation that would have prevented local governments from using taxpayer money to hire lobbyists to represent them in Austin — a top priority of the state GOP and of the state’s top officials.

He said he pointed out some people who oppose that legislation and others who might be convinced to change their minds in the future. “And it was very off the cuff. From that, that’s where these names came from.”

That doesn’t harmonize well with the party line‚ with closing ranks. Burrows’ list of names, however it came together, still has the Texas House twitching.