A few thoughts on the US withdrawal from INF Treaty 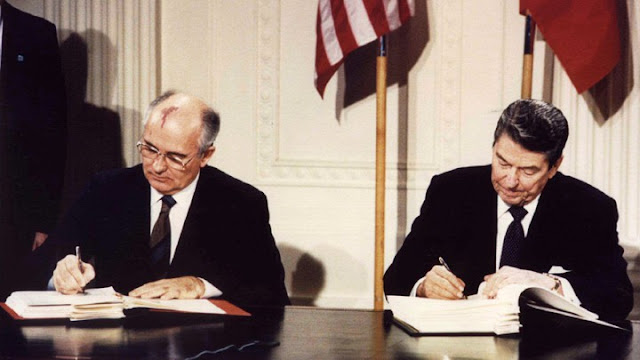 As expected, the United States officially announced its withdrawal from the Cold War–era INF treaty. President Trump announced his intention to exit the treaty last October because of alleged continued violations of the treaty by the Russian Federation. With the withdrawal now official, it’s time to develop a new agreement that will protect U.S. interests, include countries such as China, and potentially reshape Eastern European tactical defenses.

To understand the history of the INF treaty, look to Europe. As the Warsaw Institute, a Poland-based think tank, has written, a major reason for the treaty was that during the Cold War, “Soviet-made weapons aimed to intimidate European NATO members and led to a fissure between Europe and the United States.” A subsequent missile build-up occurred in the countries of Western Europe, largely supplied by the United States — including 144 Tomahawk cruise missiles that were made in the United States and ordered by then-U.K. prime minister Margaret Thatcher. After a period of high tensions between NATO and the Warsaw Pact countries, hostilities in Europe eventually subdued in no small part thanks to the yreaty.

In January 2014, the U.S. informed NATO that Russia was developing a missile that violated the INF treaty. The State Department identified a ground-launched cruise missile (GLCM) with a range capability between 500 and 5,500 kilometers — a violation of the treaty. Of particular concern, notes the Warsaw Institute, was Russia’s development of the 9M729 missile, a ground-based cruise missile that had a range of approximately 2,500 kilometers. In March 2017, General Paul J. Selva, vice chairman of the Joint Chiefs of Staff, said in front of Congress that such violations presented a risk to NATO facilities. In November 2018, Dutch foreign and defense ministers presented evidence of more violations by Russia, and in February 2019, Germany’s Frankfurter Allgemeine Sonntagszeitung newspaper revealed that Russia had deployed the 9M729 cruise missile at more locations than previously thought.

So leaving the treaty was a response to Russian misbehavior. It should not, however, dramatically change much in terms of tactical operations in Europe. The INF treaty was not easing concerns among European countries, which have been wary of Russian aggression since the annexation of Crimea — or perhaps the 2008 war with Georgia. And Russia had raised alarms when it added 13 new warships, including some armed with Kalibr cruise missiles, to its Black Sea Fleet, beginning in 2014.

While initially a surprise to NATO, Trump’s stance was “welcomed by most of the U.S. European allies,” said the Warsaw Institute, though Germany and France were notable objectors. In October 2018, the U.K. defense secretary, Gavin Williamson, said that Moscow made a mockery of the INF and that his country will “stand resolute behind the United States” in pointing out that “Russia must comply with what it had signed.” Poland’s foreign minister, Jacek Czaputowicz, said that Warsaw “understands Washington’s actions taken to withdraw from its agreement with Russia on eliminating medium-range and intermediate-range nuclear missiles.”

Given that contemporary Russia does not wield the authority or influence over Eastern Europe that the Soviet Union once did, the chances of a Cold War–era military arms race in Europe is unlikely. And, just as NATO failed to act when Russia annexed Crimea, it is also unlikely to take any significant action. However, the withdrawal could allow Eastern European countries greater hegemony in dealing with Russian militarization. In any event, the hope is that the decision by the Trump administration to withdraw from the INF treaty ultimately results in a new, updated agreement the terms of which cover modern weapons and other countries that have nuclear weapons — especially China.