Will any of the Democratic candidates take a knee? 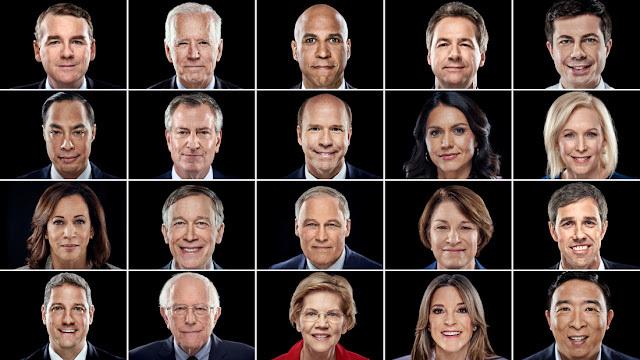 CNN will broadcast the next two Democratic debates Tuesday and Wednesday night. At 8 p.m. Eastern each night, the ten candidates will be introduced, followed by a performance of the national anthem.

Would any candidate be bold, crazy, reckless, or desperate enough to do this? If you’re one of the second- or third-tier candidates, kneeling would be a way to get attention and generate headlines before the debate even begins — and a decent shot that your picture will be on the front page of every newspaper and news website in the country. The decision to kneel would be denounced by Republicans and probably President Trump himself — an attack that would elevate any candidate still being described as “Congressman Whatshisname” or “Governor Thatotherguy.”

Some presidential candidate may look at Colin Kaepernick and conclude that he lost the battle (his NFL career effectively ended) but won the war (he became a much more well-known activist). A kneeling candidate would be assured that whatever the long-term consequence, the Twitter Left would probably rave about the decision. Right now a bunch of candidates aren’t exciting either the Twitter Left or the offline Left. Time is running out for these asterisk candidates, as the threshold for the third debate is a lot higher: 2 percent in four different polls and a minimum of 130,000 unique donors, with at least 400 unique donors per state in at least 20 states. None of these candidates can survive two consecutive boring performances.

The worst-case scenario for Democrats: Some candidate takes a knee as the anthem begins, another candidate who doesn’t want any rival to be perceived as “more woke” joins in, and by the time the singer hits “and the home of the brave,” everyone at home is watching a significant portion of the candidates on stage kneeling.