Why would politicians fix our immigration problems when they can campaign off the mess? 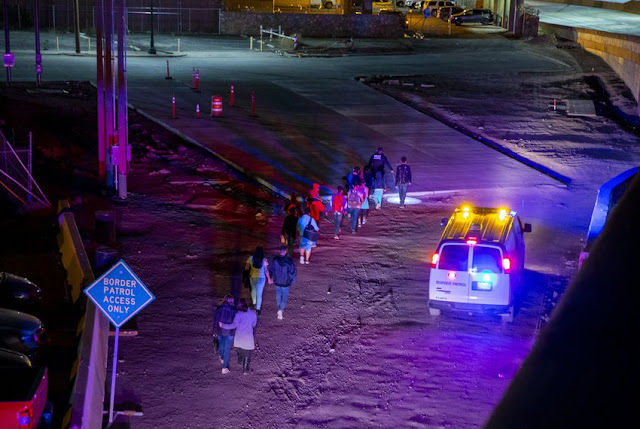 They have been able to solve other problems. The response to Hurricane Harvey was bipartisan and, as these things go, fairly smooth. And even within the gridlocked debates over immigration policy and enforcement on the U.S.-Mexico border, lawmakers were able to pass a $4.6 billion aid package as stories of horrible treatment of migrant children and families came to light this spring.

Overall, though, the political class hasn’t had the chops to address the border at all — except as a platform for rhetoric, fundraising and posturing.

If results are the measure, there’s not much to measure.

A devoted observer might get a bellyful of this and become a cynic — or go the other way and try to figure out why the pinheads in Washington, D.C., are doing what they’re doing.

But even a cursory glance at the polling in Texas shows Republican and Democratic voters deeply divided in a way that makes it difficult for the people they elect. If the partisan voters don’t overlap much, their representatives can get into political danger by entertaining certain ideas, or anything that even looks like negotiating, with the other side.

Or so it seems if you look at poll results and then watch how the people in Congress have acted — and not acted — on immigration problems that have compounded for years.

In the most recent University of Texas/Texas Tribune Poll, completed last month, 28% of Texas voters said that either border security or immigration is the most important problem facing the country. But look inside the numbers: Among Republicans, 46% put those two problems at the top. Among Democrats, only 7% did.

Those two problems top most important issues facing the state, too, with 37% of voters picking one or the other. But among Democrats, 12% chose border security/immigration (14% chose health care and 13% chose political corruption/leadership); among Republicans, 59% said border security and immigration are problems No. 1 and No. 2.

Remember President Donald Trump’s proposal to impose tariffs on imports from Mexico if that country didn’t crack down on migrants bound for the U.S.? Among Democrats, 76% opposed that, and among Republicans, 74% were in favor of it — even though Republicans were split evenly on whether that policy would help or hurt the Texas economy. Would a policy like that curb immigration to the U.S.? While 70% of Republicans said it would be effective, 79% of Democrats said it would not.

It’s not a shocker that Republicans and Democrats disagree. But suppose you were an elected official, one who wanted to find a solution that both your opponents and your supporters could agree upon. Hard to find the overlap, except when children and families are in the center ring.

A year ago, when family separations dominated the news and the administration was trying to squeeze off the stream of asylum seekers on the border, voters weren’t willing to support taking kids away from families — particularly when the government agencies splitting families were unable to say which children had been separated from which adults. Trump backed down, signing an executive order halting those separations.

A year later, the country’s immigration enforcement apparatus faces government reports of terrible conditions where migrants are being detained, and the current policy has forced Mexico to hold asylum seekers in camps that almost make the U.S. facilities look good.

It looks like everyone thinks the political gains come from their opposition to their hated opponents — and not from their ability to attack and solve a complicated and frustrating problem plaguing the U.S. and Mexico, not to mention other countries all over the planet.

The leaders are waiting for their followers to tell them what to do, instead of the other way around. While they wait, they’re playing political games.