US set to officially withdraw from nuclear arms treaty with Russia 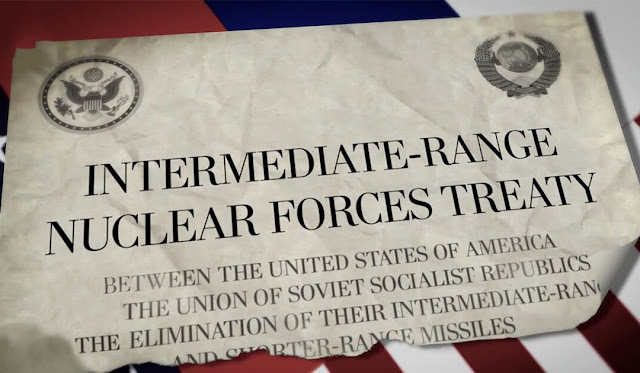 The U.S. is about to officially toss out a 30-year-old arms control treaty credited with helping end the Cold War.

Friday marks the end of a six-month withdrawal period from the Intermediate-range Nuclear Forces (INF) Treaty, after the Trump administration announced in February that the U.S. was leaving the pact. That means the U.S. will be freed from its obligations under the accord.

Now, all eyes are looking to see what comes next in U.S.-Russia arms control, with a particular focus on the administration’s preparations to move forward with previously banned weapons.

And that’s raising concerns among some Democrats that another Cold War-style arms race is on the horizon.

“The withdrawal without a follow-on is the invitation for an arms race,” said Sen. Bob Menendez (D-N.J.), the ranking member on the Senate Foreign Relations Committee. “And Russia will clearly spend money on updating and amplifying its weapons systems. And the last thing we need is another arms race. So I’m hoping there can be some effort to move us in the right direction.”

The 1987 INF Treaty prohibited the U.S. and Soviet Union, and later Russia, from having nuclear and conventional ground-launched ballistic and cruise missiles with ranges between 500 kilometers and 5,500 kilometers.

American officials have publicly accused Russia of breaching the treaty by fielding a new cruise missile, the 9M729, since the Obama administration. Trump’s announcement in February that the U.S. would withdraw from the pact followed numerous warnings to Russia and was not met with much surprise. Moscow has long denied violating the treaty and until last year, hadn’t acknowledged the missile’s existence.

Shortly after the Trump administration announced it was withdrawing from the treaty, Russia also said it would leave.

Experts see the dissolution of the INF as evidence of a broader departure from Soviet-era pacts that haven’t been flexible enough to keep pace with the evolving global security challenges in the decades following the fall of the Iron Curtain.

Frank Rose, who served as assistant secretary of State for arms control, verification and compliance during the Obama administration, argued the INF Treaty ultimately collapsed because it wasn’t able to respond to changes in the security environment in Eurasia, with countries like China fielding new arms capabilities.

“I see the INF’s demise as the latest installment in a larger story, and that’s the collapse of the U.S.-Russia bilateral strategic stability framework,” said Rose, now a senior fellow at the Brookings Institution. “These arms control treaties have not kept up to the changes to the security environment.”

In Congress, administration critics say they are looking for signs Trump officials have an arms control plan to fill the void.

“I do understand the Russians are violating the treaty. I don’t want to see us simply pull out and not try to negotiate something else because another arms race doesn’t serve anybody,” House Armed Services Committee Chairman Adam Smith (D-Wash.) said. “I am worried that we don’t seem to have a path forward on an arms control discussion with Russia, or with China for that matter, and that the administration seems unwilling to move forward on that path.”

With the INF Treaty ending, just one major arms control agreement between the U.S. and Russia remains: the New START Treaty.

New START, negotiated by the Obama administration, caps the number of deployed nuclear warheads each country can have at 1,550.

John Bolton, Trump’s national security adviser and skeptic of arms control agreements, has signaled the administration is unlikely to renew New START, which is up for renewal in 2021.

The administration has indicated it wants to expand the scope of the treaty as a condition of extension, by taking steps such as folding in China and other weapons not currently covered by the agreement.

To that end, earlier this month, a U.S. delegation met with Russian officials in Geneva to discuss “the president’s vision for a new direction in nuclear arms control with Russia and China,” the State Department said at the time.

Arms control advocates fear the administration is using China as a red herring to abandon New START. China is unlikely to agree to join the agreement and, in any case, is known to have far fewer nuclear weapons than the treaty allows, advocates argue.

“The collapse of the INF Treaty makes an extension of New START all the more important in my view,” said Kingston Reif, director for disarmament and threat reduction policy at the Arms Control Association. “Pursuit of a broader agreement with Russia and China is a worthwhile objective, but not at the expense of extending New START, and so far, the administration doesn’t appear to have a plan or the capacity to negotiate a new, more comprehensive deal.”

Trump ally Sen. Jim Risch (R-Idaho), chairman of the Foreign Relations Committee, said he does not see INF and New START as linked, but that there is “plenty of pressure on New START already.”

More immediately, the U.S. and Europe are preparing for a post-INF world.

Experts generally agree with the Trump administration’s decision to withdraw from INF given Russia’s years of flouting its obligations. But they’ve criticized how Trump announced his intention to do so last at a campaign rally October, saying it didn’t put the blame squarely on Russia and left U.S. allies in the dark.

Rose said he has concerns over whether the administration can manage the withdrawal from the treaty and future arms control negotiations.

“The key question now that the treaty will die on Friday is this: Does the Trump administration have the diplomatic skills to manage the treaty’s demise in a way that maintains the cohesion of our allies, maintains a level of stability with Russia in the mid- to near-term, and facilitates the transition from the currently stability framework?

“I think the jury is out whether they have the diplomatic skills and the team in place to effectively do it,” he added.

The Guardian reported earlier this month that the State Department arms control office has been reduced from 14 staffers to four since the Trump administration began.

The U.S. and NATO have conferred several times since Trump’s October comments created anxiety among American allies, with NATO eventually backing the decision to withdraw.

Still, NATO has made clear it does not want U.S. nuclear missiles that violate the treaty being stationed on European soil. Options that NATO has discussed include more military exercises; intelligence, surveillance and reconnaissance; air and missile defense; and unspecified conventional capabilities.

“We will not mirror what Russia does,” NATO Secretary-General Jens Stoltenberg said last month. “We do not want a new arms race, but as Russia is deploying new missiles, we must ensure that our deterrence and defense remain credible and effective. This is NATO’s job.”

The Pentagon said in March it plans to flight-test a non-nuclear cruise missile with a potential range of 1,000 kilometers in August.

Asked Tuesday for an update on the status of the test, the Pentagon did not directly comment, but said "it appears that the INF Treaty will terminate on August 2, 2019, as a result of Russia’s material breach."

“Russia has not taken any meaningful steps to return to verifiable compliance with its obligations," Pentagon spokeswoman Lt. Col. Carla Gleason said in an email to The Hill. "After the treaty ends on August 2, 2019, the United States will no longer be under the INF Treaty prohibitions on possession, production, and flight-testing of ground-launched, intermediate-range cruise and ballistic missiles."

The Pentagon has requested $10 million in its fiscal 2020 budget to develop missile systems within the INF Treaty range.

House Democrats, however, are hoping to block the Pentagon from moving forward with the missiles. The House version of the National Defense Authorization Act (NDAA) includes an amendment that prohibits funding for the missiles unless certain conditions are met.

The bill must be reconciled with the Senate’s version, where Republicans are vowing to strip the amendment.

“You don’t have a treaty when you only have one party adhering to it. The Russians haven’t for years,” said Sen. Deb Fischer (R-Neb.), who chairs the Senate Armed Services subcommittee with oversight of nuclear weapons. “I hope the Senate NDAA is adopted because it’s the one that needs to happen.”