U.S.-Mexico border detention efforts aren’t good enough, according to the government itself 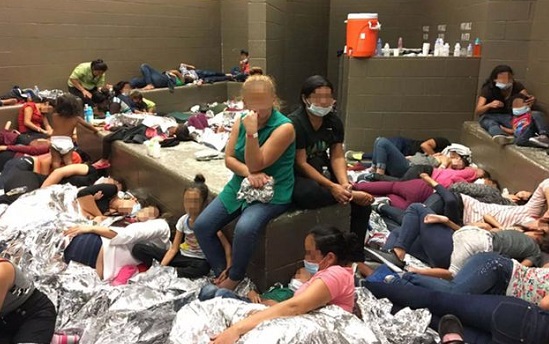 If you were doing to your kids what the U.S. government is doing to the kids in its custody on the Mexican border, the government might send people to your house to save the children. At the least, it’d sound the alarm. And as it turns out, the government’s own watchdogs have been barking for months.

The Department of Homeland Security’s Office of Inspector General has been bird-dogging the situation on the border, writing reports and publishing them for an audience of elected and nonelected nonreaders. Eyewitness accounts from lawyers, journalists and members of Congress are spotty, but the information coming from official sources paints some of the picture, in reports published on government websites.

Those reports offer a peek into what the government is doing, and what it’s up against — in the government’s own words — from reports filed by OIG. These examples are from two of their reports. (Here’s full text of what was filed in May and another report from this month.)

“[The Department of Homeland Security] concurred with the recommendation we made to alleviate overcrowding at [El Paso Del Norte Processing Center], but gave a target completion date of November 30, 2020. Because DHS’s corrective action is critical to the immediate health and safety needs of detainees, who cannot continue to be held in standing-room-only conditions for weeks until additional tents are constructed, we consider the recommendation open and unresolved.”

Read that paragraph again, with particular attention to the deadline: Homeland Security said it would resolve an urgent overcrowding problem three or four weeks after the next general election for president. The inspector general’s office said it would keep up the heat.

The OIG acknowledges the size of the crisis the government is trying to manage. “In May 2019, U.S. Customs and Border Protection (CBP) and Border Patrol leadership jointly testified before Congress that they are experiencing an unprecedented border security and humanitarian crisis along the southwest border. According to CBP statistics, the number of southwest border migrant apprehensions during the first seven months of FY 2019 has in general already surpassed that of the total apprehensions for each of the previous four fiscal years.”

But the inspectors said the situation is dangerous to migrants and minders alike. “We are concerned that overcrowding and prolonged detention represent an immediate risk to the health and safety not just of the detainees, but also DHS agents and officers. Border Patrol management on site said there is a high incidence of illness among their staff. Border Patrol management ... also raised concerns about employee morale and that conditions were elevating anxiety and affecting employees’ personal lives. They noted that some employees eligible for retirement had accelerated their retirement dates, while others were considering alternative employment opportunities.”

“During the week of June 10, 2019, we traveled to the Rio Grande Valley in Texas and again observed serious overcrowding and prolonged detention in Border Patrol facilities requiring immediate attention,” they wrote. “Specifically, Border Patrol was holding about 8,000 detainees in custody at the time of our visit, with 3,400 held longer than the 72 hours generally permitted under [Customs and Border Protection’s Transport, Escort, Detention and Search] standards. Of those 3,400 detainees, Border Patrol held 1,500 for more than 10 days.”

It’s a chain effect. Border Patrol is supposed to process migrants and move them along quickly, but it can’t transfer detainees until ICE has space for adults and families, or DHS has room for unaccompanied children. If there’s no room there, things get dangerously backed up. “In addition to the overcrowding we observed, Border Patrol’s custody data indicates that 826 (31%) of the 2,669 children at these facilities had been held longer than the 72 hours generally permitted.”

More than 50 of the unaccompanied kids, they said, were under age 7, and some had been in custody for more than two weeks. “While all facilities had infant formula, diapers, baby wipes, and juice and snacks for children, we observed that two facilities had not provided children access to hot meals — as is required by the TEDS standards— until the week we arrived. Instead, the children were fed sandwiches and snacks for their meals.”

Most of the detainees aren’t kids, and conditions for many adults appear to be even worse. “[CBP’s standard] provides that ‘under no circumstances should the maximum [cell] occupancy rate, as set by the fire marshal, be exceeded.’ However, at one facility, some single adults were held in standing-room-only conditions for a week and at another, some single adults were held more than a month in overcrowded cells.”

In the latest report, the inspector general reiterated the space shortages it previously reported, with fresh numbers — and an observation that federal policymakers haven’t provided the money required for the enforcement those policymakers have demanded.


“Within DHS, providing long-term detention is the responsibility of ICE, not CBP. During the week of our visits, ICE had approximately 54,000 beds occupied nationwide, but was only funded for 42,000 beds ... Border Patrol continues to hold detainees for more than 72 hours in overcrowded conditions while they await transfer.”

Most of us wouldn’t treat our own kids (or parents) like that. Our own government wouldn’t allow it.