Two people arrested after flag-burning outside the White House 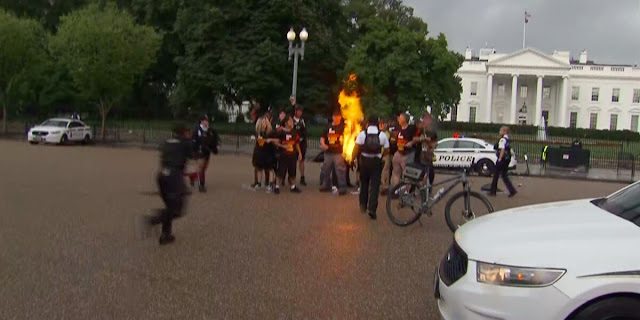 Two protesters were arrested and a pair of U.S. Secret Service officers received minor injuries in front of the White House on the Fourth of July after an American flag was set on fire ahead of President Trump’s “Salute to America” celebration, the agency says.

The two were allegedly arrested for "burning an American flag outside the limits of a permit that had been issued by the National Park Service."

The Secret Service said that one person was arrested for felony assault on a police officer and for malicious burning, and the other was arrested for obstructing a police investigation and resisting arrest. One person was transported to a hospital for minor injuries, and two Secret Service officers were also transported to a local hospital for treatment.

USA Today reported that a group calling themselves the Revolutionary Communist Party burned the flag and posted video showing protesters pushing and shoving each other after the flames died down.

Washington Examiner reporter Steven Nelson shared footage of the burning on Twitter and reported that a veteran grabbed the flag while it was still on fire.

A group of protesters linked arms after the flag burning and chanted “America was never great” in the video, a reference to Trump’s 2016 presidential slogan “Make America Great Again.”

The National Mall was crowded with both supporters of the president and his critics Thursday. Many were seen wearing their own “Make America Great Again” gear, but groups also brought signs criticizing the president with slogans like “Impeach Trump” and “She’s not my type,” a reference to Trump’s denial of sexual assault allegations last week.