Trump: 'We're not looking for regime change' in Iran 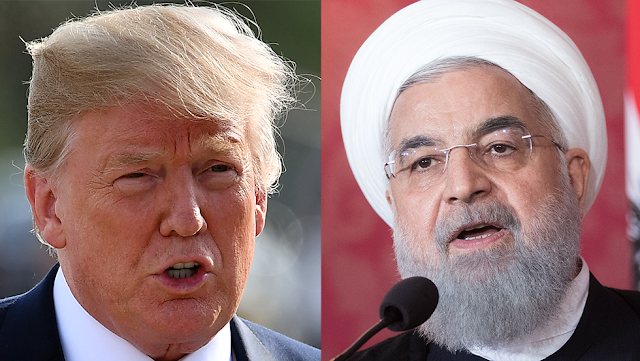 President Trump on Tuesday reiterated that he is not seeking regime change in Iran after the country's foreign minister suggested it may be open to negotiations over its missile program.

"We're not looking for regime change," Trump said during a Cabinet meeting. "We want them out of Yemen."

Secretary of State Mike Pompeo, who was seated next to Trump, noted the Iranians have said they are ready to discuss their ballistic missile program.

"They’d like to talk, and we’ll see what happens," Trump said.

The president made clear during a visit to Japan in May that he was not interested in regime change in Iran, saying his focus was on preventing the country from obtaining nuclear weapons.

But in the six weeks since, tensions between the two sides have escalated and Iran has enriched uranium beyond limits put in place during the Obama-era nuclear deal, which Trump has derided as among the "worst" ever.

After Iran shot down a U.S. surveillance drone last month, the president initiated and then called off a retaliatory strike after he said he learned of the expected casualties.

The international agency that monitors Iran’s compliance with the 2015 agreement confirmed last week that Tehran has exceeded the agreement’s uranium enrichment level. It marked Tehran’s second major breach of the nuclear pact in recent weeks.

But Iran's foreign minister, Mohammad Javad Zarif, provided an opening for potential diplomatic relations on Tuesday when he suggested for the first time that the country's ballistic missile program could be up for negotiations as part of talks with the U.S.

Zarif cautioned that Iran would exact a high price before agreeing to talks, including the end of American arms sales to Iranian foes in the region such as Saudi Arabia and the United Arab Emirates.

The country may also seek the easing of sanctions, which Trump has used en masse since pulling out of the Obama-era accord last year. The Trump administration has hammered Iran's oil industry, its metals sector, its Revolutionary Guard and the supreme leader in an effort to isolate the country and cripple its economy.