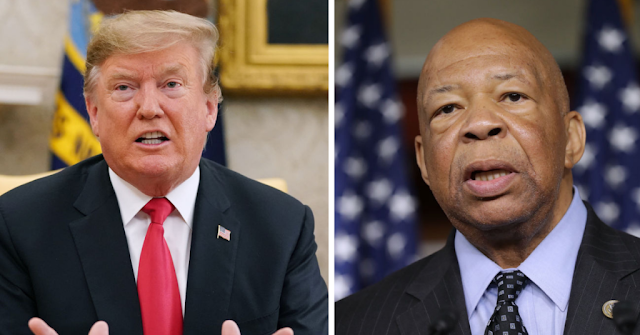 “Rep, Elijah Cummings has been a brutal bully, shouting and screaming at the great men & women of Border Patrol about conditions at the Southern Border, when actually his Baltimore district is FAR WORSE and more dangerous,” Trump tweeted.

Trump asserted that Cummings’s district, which encompasses downtown Baltimore, was the "worst run" in the U.S., claiming that the Maryland city was "corrupt" and that "no human being would want to live there."

“Why is so much money sent to the Elijah Cummings district when it is considered the worst run and most dangerous anywhere in the United States,” Trump continued in the early morning tweetstorm. “No human being would want to live there. Where is all this money going? How much is stolen? Investigate this corrupt mess immediately!”

Cummings’s district is 55 percent African American and 35 percent white. It is the second-most wealthy and educated among Maryland's majority-black districts.

Cummings later responded to the early morning broadside as a number of his Democratic colleagues rushed to his defense.

"Mr. President, I go home to my district daily. Each morning, I wake up, and I go and fight for my neighbors," he tweeted. "It is my constitutional duty to conduct oversight of the Executive Branch. But, it is my moral duty to fight for my constituents."

"We have seen cases where the administration has deported parents without their children and still, to this day, have not reunited those families,” he said. "This is government-sponsored child abuse ... on a grand scale.”

Cummings, who has repeatedly condemned the Trump administration's immigration policies and the federal government's treatment of immigrants at the border, went off on acting Homeland Security Secretary Kevin McAleenan last week over the conditions of U.S.-Mexico border facilities that house migrants.

“You feel like you’re doing a great job, right?” Cummings asked during a hearing. “What does that mean? What does that mean? When a child is sitting in their own feces, can’t take a shower?” he continued, his voice rising. “Come on, man. What’s that about? None of us would have our children in that position. They are human beings.”

The hearing followed a recent report from the Department of Homeland Security’s Office of Inspector General, which found "dangerous overcrowding" and "prolonged detention of children and adults" at several facilities. McAleenan, during the hearing, pushed back on Cummings’s assertions, inviting him to tour a border facility to see firsthand that children are being reunited with their parents and conditions are improving.

The president's remarks early Saturday also came days after the House Oversight and Reform Committee authorized Cummings to subpoena records from the White House in connection with an investigation into aides’ use of personal email and text applications for official business.

“There are serious questions about this White House’s use of personal email and text accounts. We must issue these subpoenas to get our answers,” Cummings said Thursday.

Cummings has repeatedly requested records from the White House related to his investigation of Trump officials' email and text use. The White House has refused to comply with myriad document requests from Democrats, arguing they are overstepping their authorities and infringing on executive branch privileges.