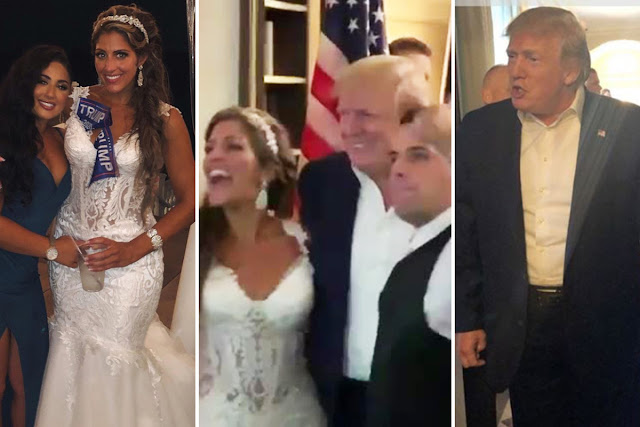 President Trump made a surprise appearance at a wedding reception Saturday night that took place at his New Jersey golf club, prompting the bride, groom and attendees to break into chants of “USA! USA!”

Video circulating on social media Sunday showed Trump walk out to the reception and the bride and groom rush over to join him. The crowd then erupted in the patriotic chant.

Groom P.J. Mongelli later told CNN that Trump showing up at the wedding “was a complete and utter surprise.”

He said that he and his then-fiancée Nicole Marie Mongelli sent Trump multiple invitations to attend.

P.J. Mongelli said Trump first appeared during the cocktail hour to meet the bride and other family members before he made a second appearance at the reception at the request of the newlyweds.

Not only are P.J. and Nicole Marie Mongelli big Trump supporters but they also got engaged at Trump’s golf club in Bedminster in 2017. The wedding also included MAGA-themed apparel and Trump flags.

Trump spent the weekend at his New Jersey golf club and returned to Washington Sunday evening. He has previously made an impromptu drop-in during a wedding in 2017 at the same club.

So honored to have President Trump @realDonaldTrump at my brothers wedding last night at @TrumpBedminster . Thank you for making their dream come true! #45 #KAG #2020 #USA @realDonaldTrump pic.twitter.com/hwlxaIQpYH