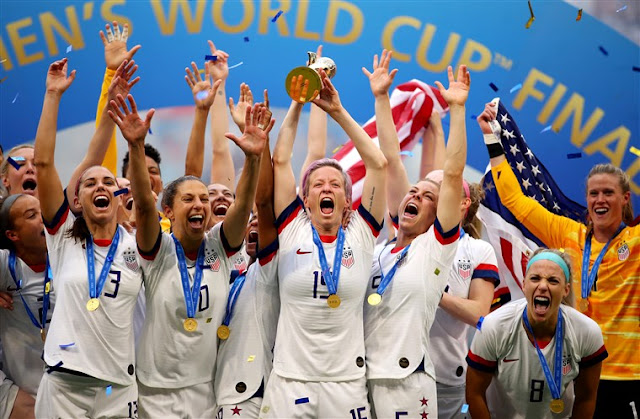 "America is proud of you all!"

The U.S. team defeated Netherlands 2-0 during the game in Lyon, France.

Several members of the women's team, including co-captain Megan Rapinoe, have been outspoken about not wanting to go the White House to honor the back-to-back title.

Rapinoe, who won the tournament’s Golden Boot as the top scorer, said last month that she is “not going to the f---ing White House” in the case of a World Cup win.

In a tweet, Trump responded that “leagues and teams love coming to the White House” and added he is a “big fan of the American Team, and Women’s Soccer,” but cautioned that “Megan should WIN first before she TALKS! Finish the job!”

It is not yet clear if the team will visit if an invitation is extended. Star forward Alex Morgan said Friday that the team would make that decision together.

Making a celebratory White House visit, previously a standard part of winning a title for major sports teams, has become a fraught subject for many athletes during Trump's presidency.

A number of teams and individual athletes have rejected invitations from the president, with many citing his divisive rhetoric, particularly with regards to race.

Trump disinvited the Golden State Warriors after the team won the NBA title in 2017. The Cleveland Cavaliers and Warriors made clear they would not accept an invitation during the 2018 NBA Finals. It is unclear if the Toronto Raptors were officially invited following their win this year.

The New England Patriots and Washington Capitals did visit the White House after winning the 2017 Super Bowl and 2019 Stanley Cup, respectively.