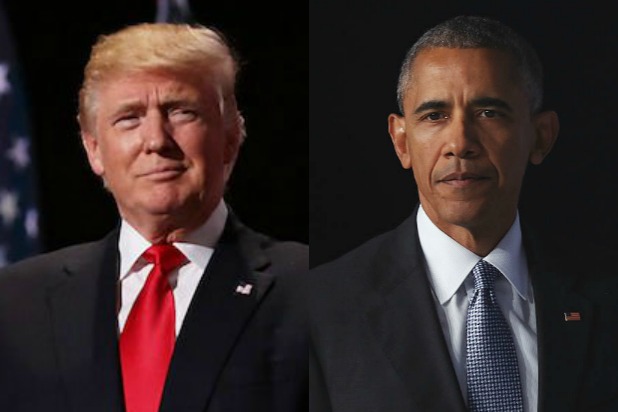 President Trump on Friday lashed out at Democrats over their ongoing investigations into his administration, suggesting there should instead be probes into former President Obama's book deal and other activities under his predecessor.

"They want to investigate, they want to go fishing and I watched Bob Mueller and they have nothing," Trump said of Democrats during an Oval Office gathering to announce an agreement with Guatemala.

Obama and former first lady Michelle Obama signed lucrative book deals with Penguin Random House in 2017 after they left office. The terms of the agreement were not disclosed.

It is not uncommon for presidents to sign book deals to write a memoir upon leaving office. Former President George W. Bush signed a deal with Crown Publishing in 2009.

In a bizarre criticism later in the media availability, Trump complained about a new air conditioning system he said was installed in the West Wing during the Obama administration.

But Trump frequently targets Obama for criticism and has spent much of his administration undoing policies implemented by his predecessor.

His latest call for an investigation is likely to renew criticism that Trump tends to float wielding the Justice Department against political opponents.

Trump's rant on Friday came as Democrats vowed to continue investigations into Trump's possible obstruction of justice and abuse of power.

Former special counsel Robert Mueller testified on his sweeping investigation before two House Committees earlier this week. While his testimony was uneven at times, Mueller explicitly laid out his findings about Russian interference in the 2016 election to aid Trump.

The testimony gave a renewed sense of urgency to some Democrats seeking to remove Trump from office. Multiple Democratic lawmakers have come out in favor of launching an impeachment inquiry in the wake of Mueller's testimony, bringing the total number in favor of such a move to nearly 100.

The president was set off by a question about House Judiciary Chairman Jerrold Nadler (D-N.Y.) indicating the panel would sue to enforce a subpoena against former White House counsel Don McGahn.

"What they’re doing is a disgrace," Trump said. "So destructive to our country, and I think that’s why we’re going to take back the House."