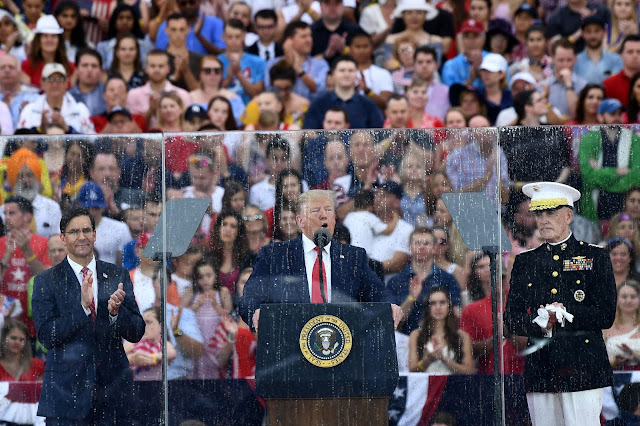 President Trump avoided infusing partisan rhetoric into his rainy July 4 speech on the National Mall, though he still received energetic applause by a drenched crowd of supporters.

At his long-planned “Salute to America,” Trump stood on a riser with bleachers of attendees and the Lincoln Memorial serving as a backdrop, and special guests seated to either side. VIPs with select tickets were able to stand in front of the reflecting pool to take in Trump's remarks, which focused largely on celebrating the American military.

Fences spanning across the reflecting pool and onto the walkways halfway between the Lincoln Memorial and World War II Memorial prevented those without the credentials from getting too close, creating a separation of White House invitees and the rest of the general public.

Instead, crowds of onlookers in red, white and blue packed into the sides of the Mall’s Reflecting Pool and settled for a distant view of the president on screens set up near the Lincoln Memorial as they endured spurts of heavy rain.

The optics added fuel to criticism that Trump was putting on an event akin to one of his campaign rallies.

Nevertheless, the determined crowd braved roughly three hours of rain-soaked shirts and ineffective ponchos as they eagerly awaited the president’s speech, chanting “USA, “four more years,” and “Trump” at various times before and throughout Trump’s speech.

The crowds even created new chants in light of the rain, with some shouting, “Put down the umbrellas” at those whose stay-dry devices were obstructing the screens broadcasting his speech.

The president refrained from sprinkling in political rhetoric. Apart from passing references to his long-desired Space Force and praise for Immigrations and Customs Enforcement and Border Patrol, his speech was almost singularly focused on the U.S. military and its legacy in battle.

"The future of American freedom rests on the shoulders of men and women willing to defend it," Trump said. "Now is the chance to join our military and make a truly great statement in life, and you should do it."

The crowd only turned away from the president to watch five separate flyovers honoring each branch of the military, which marked high points of Trump's speech and prompted raucous applause as Marine One helicopters, F-35 stealth jets and the Navy Blue Angels passed overhead.

Trump also requested military tanks be brought to the capital for the event. They were largely kept away from the masses, save for one armored vehicle that was on display near the crowd in front of the Lincoln Memorial.

Democrats and Washington, D.C., officials had criticized the military presence, as well as the use of National Park Service funds to pay for the event.

The president also focused his speech on American exceptionalism, recounting significant periods of the nation’s history and how its founding principles have led the United States to flourish as a free country.

“Americans love their freedom and no one is ever going to take that away,” Trump said, receiving loud cheers. “Our nation is stronger today than it ever was before,” he later added.

Among those who sat near the president were Vice President Pence, Acting Secretary of Defense Mark Esper and Chairman of the Joint Chiefs of Staff Gen. Joseph Dunford.

The White House had invited family and friends of the administration, government officials, Pentagon brass and military personnel to attend. The Republican National Committee (RNC) and Trump campaign each received a small allotment of tickets to provide to political allies as well.

Pro-Trump supporters staked out their spots hours in advance, while anti-Trump activists also staked out a spot on the mall to make a showing, touting signs that read “Impeach Trump.”

A flag-burning incident in front of the White House resulted into the arrest of two people, as well as two U.S. Secret Service agents being treated for minor injuries.