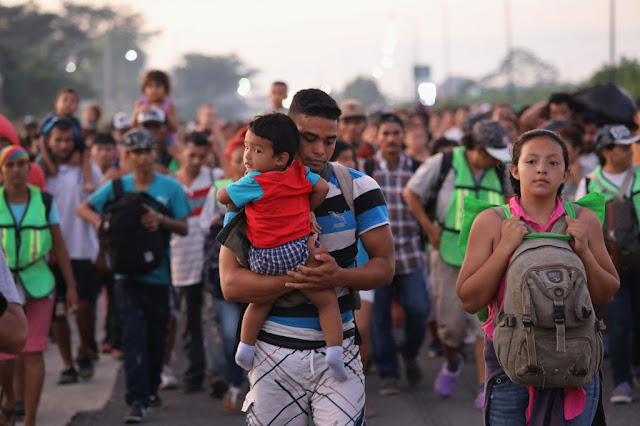 The Trump administration is moving to end asylum protections for most Central American migrants, the Department of Justice announced Monday.

According to text of the rule set to publish in the Federal Register on Tuesday, asylum seekers who pass through another country before reaching the United States will be ineligible for asylum when they reach the southern border.

The Departments of Homeland Security and Justice announced the Interim Final Rule (IFR) in a joint statement Monday.

“The Departments are amending their respective regulations to provide that, with limited exceptions, an alien who enters or attempts to enter the United States across the southern border after failing to apply for protection in a third country outside the alien’s country of citizenship, nationality, or last lawful habitual residence through which the alien transited en route to the United States is ineligible for asylum,” states the text of the rule.

Trump administration officials described it as necessary to reduce the burden placed on the U.S. by the growing number of immigrants seeking asylum at the southern border by allowing agencies to more quickly process cases by weeding out individuals trying to “exploit” the asylum protections.

“The United States is a generous country but is being completely overwhelmed by the burdens associated with apprehending and processing hundreds of thousands of aliens along the southern border,” Attorney General William Barr said in a statement.

“This Rule will decrease forum shopping by economic migrants and those who seek to exploit our asylum system to obtain entry to the United States—while ensuring that no one is removed from the United States who is more likely than not to be tortured or persecuted on account of a protected ground,” Barr said.

In addition to ending asylum protections for most Central Americans, the rule is also likely to add a new hurdle for asylum-seekers as they go through legal proceedings to remain in the U.S., as it would require officers and immigration judges “to apply this new bar on asylum eligibility” during “credible-fear” interviews, according to the text of the rule.

The rule applies only to those who enter or arrive in the U.S. on or after the rule’s effective date, which is expected to be Tuesday.

Central Americans make up the bulk of non-Mexican migrants attempting to enter the United States through the Southwest border to claim asylum, but recent years have seen an increase in prospective asylees from the Caribbean, South Asia and Sub-Saharan Africa.

The announcement is the latest of several efforts by the Trump administration to tighten asylum rules at the border. The president has railed against asylum-seekers, and announced earlier this year that he would seek to adopt a series of restrictive measures aimed at those hoping to obtain asylum within the U.S.

Monday’s announcement also landed after immigration raids took place across the nation this weekend. The ACLU filed a preemptive lawsuit ahead of the raids aimed at protecting the rights of asylum-seekers within the United States.

Barr earlier this year issued an order that would allow for certain asylum-seekers to be detained indefinitely during immigration proceedings.

But a federal judge in Seattle struck down that rule, finding it unconstitutional. The Ninth Circuit Court of Appeals is now hearing briefings on the appeal of the order.

The administration also implemented a “Remain in Mexico” policy earlier this year that requires that some asylum-seekers stay in Mexico while their cases are processed.

A district judge in California initially ruled against the policy and blocked it from going into effect, but the Ninth Circuit has since allowed it to be enforced during the appeals process.

Trump has for months decried U.S. immigration laws as the “dumbest” and “worst” of any country in the world. He has repeatedly called on Congress to tighten asylum laws in particular, but legislation to do so has failed to gain traction in either chamber.

Lawmakers late last month passed a funding package that included $4.5 billion in resources for agencies responding to the influx of migrants at the southern border. Apprehension numbers surged in the first half of 2019, with a sharp decrease coming in June.

Acting Department of Homeland Security (DHS) Secretary Kevin McAleenan said in a statement Monday that the additional funding was insufficient on its own, and that the interim rule will “reduce overwhelming burdens” on the immigration system in the meantime.

The rule announcement comes on the heels of visits to the border by several lawmakers and Vice President Mike Pence. Democrats expressed outrage after they said they witnessed migrants being held in shoddy conditions without access to basic hygiene and other resources.

Pence visited detention facilities in Texas last week, and was joined by Republican senators. Images and video quickly circulated of hundreds of men crowded into cages who said they had not showered in days and lacked access to basic resources.

Pence said he was “not surprised” by the images, but credited border agents for their “compassionate work.”