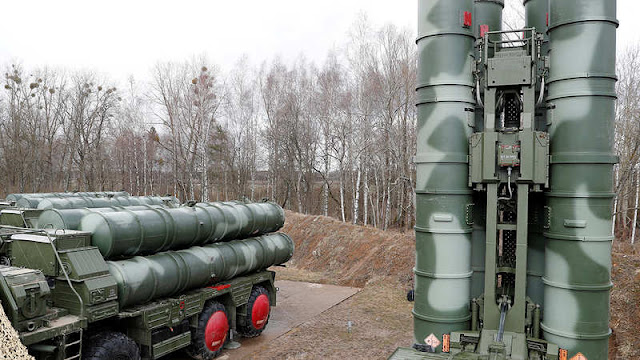 The Trump administration on Friday had little to say publicly after Turkey received a Russian air defense missile system, despite months of threats from the U.S. that doing so might lead to sanctions against the NATO ally.

Pentagon officials had been scheduled to brief reporters on camera Friday morning about Turkey's purchase of the S-400 surface-to-air missile defense system. But after several delays and postponements, the briefing never took place.

Under Secretary of Defense for Acquisition and Sustainment Ellen Lord and Deputy Under Secretary of Defense for Policy David Trachtenberg were set to brief reporters at 11:15 a.m. on the Pentagon's "response to Turkey accepting delivery" of the Russian system. The event was postponed shortly before it was scheduled to begin. It was then moved to 1:45 p.m. before being postponed indefinitely.

A Pentagon spokesman told reporters late Friday afternoon that Acting Defense Secretary Mark Esper spoke with his Turkish counterpart, Defense Minister Hulusi Akar, for half an hour at 1:30 p.m. But he added that there would be no readout from the call.

The Defense Department often provides a summary of what was discussed between officials at that level.

The White House and State Department have not issued statements on Turkey's receipt of the Russian system.

The Defense Department in June said Turkey would not be allowed to buy, build or maintain American-made F-35 Lightning II fighters unless it gave up its plans to acquire the S-400.

Turkey, a partner country involved in the F-35, was set to buy at least 100 of the fifth generation fighter jets. The country also was expected to play a significant role in sustaining the aircraft.

In the past year, however, Ankara has refused give up its planned purchase of the S-400, which is not compatible with NATO systems and could be used to gather intelligence on the advanced aircraft.

Gen. Mark Milley, President Trump's nominee to be the next chairman of the Joint Chiefs of Staff, recommended in written testimony to the Senate Armed Services Committee on Thursday that the administration "discontinue the transfer of F-35 aircraft to Turkey and unwind Turkey from the F-35 program if Turkey accepts delivery of the S-400."

Despite Friday's silence from the administration, lawmakers have made clear what they want following Turkey's decision.

The top members of the Senate Armed Services Committee, Senate Foreign Relations Committee and House Foreign Affairs Committee all called on the administration to terminate Turkey’s participation in the F-35 program and to sanction the country as required under the Countering America’s Adversaries Through Sanctions Act, a penalty on U.S. partners that buy Russian military equipment.