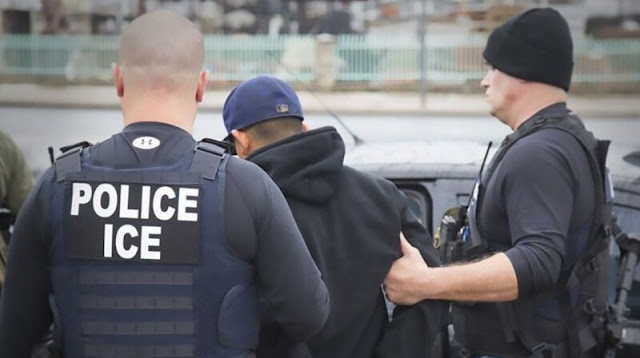 U.S. Rep. Sheila Jackson Lee met with faith leaders in Houston on Saturday to invite undocumented immigrants to seek refuge in churches, mosques and synagogues and call on religious organizations to open their doors ahead of Sunday’s anticipated deportation roundup by Immigration and Customs Enforcement officers.

“It is to my dismay that I have to come home to find many of those who live in my jurisdiction, my constituency, are panicked, frightened and in fear of their lives,” said Jackson Lee, a Houston Democrat. “I say to the federal authorities: that you are well aware and on notice that you are not able to come into a church and demand anyone that is a representative of the faith to give anyone to anyone.”

Jackson Lee gathered with faith and local leaders Saturday afternoon at the Living Water International Apolistic Ministries in Houston. The ministry, along with half a dozen other churches, announced it would shelter undocumented immigrants on Sunday who fear they are in danger of being taken by ICE.

“We want to be a beacon of light for those who may be in fear. So when I got the call, I couldn't do anything but accept,” said Apostle Robert Stearns, leader of Living Water. “There is nothing strange to us in doing this. This is our heart and our passion.”

Immigrant communities in Houston and cities across the country have been preparing in the past week for the deportation raids that federal officials say will start Sunday. The operation will target some 2,000 undocumented immigrants. The New York Times reported this week that the raids could also include “collateral” deportations — the removal of undocumented immigrants that were not the target of the raids, but happen to be there when they happen.

ICE officers are, technically, allowed to enter "sensitive locations," such as churches, schools and hospitals, but generally try to avoid doing so.

It is not clear if the churches will face legal consequences for sheltering undocumented immigrants from deportation. Stearns, with Living Water, said his church is not trying to break the law, but rather do what it believes to be right.

"We need the President to understand that there are some areas that we’re duty bound to do," Stearns said. "We’re just trying to sustain those who need to be sustained until Congress and him can get some things together and get some things sorted out."

Jackson Lee's office did not immediately respond to questions about potential legal repercussions.

Cesar Espinosa is the executive director of Familias Inmigrantes y Estudiantes en La Lucha (FIEL), a group that advocates for immigrants and social justice in Houston. Espinosa said many immigrants are fearing for their lives and safety ahead of Sunday and could be looking for a place of refuge.

“As long as we can remember, the church has always been a sanctuary for people who are fleeing persecution,” Espinosa said.

Texas Republicans have continually criticized Democrats' stance on the border crisis and deportation operations. On Saturday, U.S. Rep. Dan Crenshaw, a Houston Republican, tweeted out what he called a summary of Democrats' immigration plan: no border wall, no asylum reform, decriminalization of improper border crossings, and not enforcing deportation orders.

"Seriously, ask yourself: is that your position?" Crenshaw wrote. "Most Americans say no."