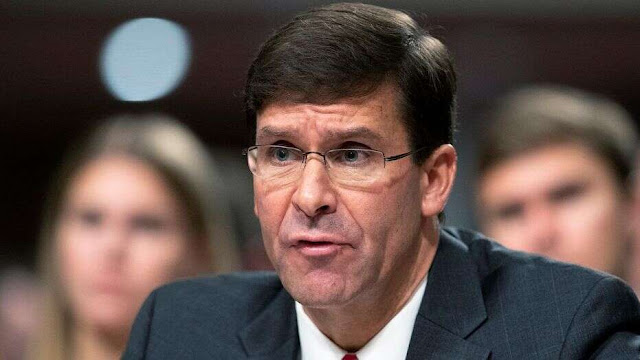 The Senate voted on Tuesday to confirm Mark Esper to be President Trump's next Pentagon chief, capping off a rollercoaster six months since former Defense Secretary James Mattis's resignation.

The confirmation of Esper makes him the first Senate-approved Defense secretary since late December.

The vote comes as the Trump administration juggles multiple foreign policy challenges, including growing tensions with Iran, talk of new sanctions against Turkey and lingering congressional pushback over the U.S.-Saudi relationship.

Senate Majority Leader Mitch McConnell (R-Ky.) praised Esper ahead of the vote, noting that a second Senate-confirmed Defense secretary is "beyond urgent."

"The nominee is beyond qualified. His record of public service is beyond impressive. His commitment to serving our service members is beyond obvious and the need for a Senate-confirmed secretary of Defense is beyond urgent," he added.

The vote marks the end of a months-long effort to find a replacement for Mattis, who resigned amid deep military and foreign policy strategy disagreements with Trump. It also caps off the longest period the Pentagon has gone with an acting secretary.

Trump had been expected to nominate then-acting Defense Secretary Patrick Shanahan, who ultimately withdrew himself from consideration amid multiple reports describing past domestic violence incidents involving his family.

Instead, Trump quickly put forward Esper; senators have ushered him through his confirmation process at a breakneck speed.

The Senate Armed Services Committee approved his nomination by a voice vote on Thursday, waiving the panel's rule that there has to be seven days between a confirmation hearing and the committee vote.

Esper's ascension comes amid a shakeup of top military and Pentagon officials. The Pentagon announced last week that its Deputy Undersecretary of Defense for Policy David Trachtenberg, its No. 2 policy official, is retiring.

Esper was confirmed as Army secretary by the Senate 89-6 in the fall of 2017. A former infantry officer, Esper previously served as a top executive at the defense contractor Raytheon before joining the Trump administration.

His nomination appeared to be on a glide path after a largely noncontroversial confirmation hearing last week.

Sen. Tim Kaine (D-Va.) gave him a glowing review as he introduced him at the confirmation hearing.

“Most of us were very discouraged by the resignation of Secretary Mattis, and what we’ve hoped for is a successor who could show the same level of candor and principle and a willingness to remain independent even in the most challenging circumstances,” Kaine said.

“I believe that Dr. Esper has those traits and would encourage all of my colleagues to support this nomination,” he said.

Esper did run into pushback from Sen. Elizabeth Warren (D-Mass.), a member of the committee who is running for president, over ethics concerns related to his earlier employment at Raytheon.

Warren wanted to know if Esper would commit to forgoing employment with a defense contractor, or payments of any kind from a defense firm, for at least four years after his government service.

“No senator, I will not,” Esper replied.