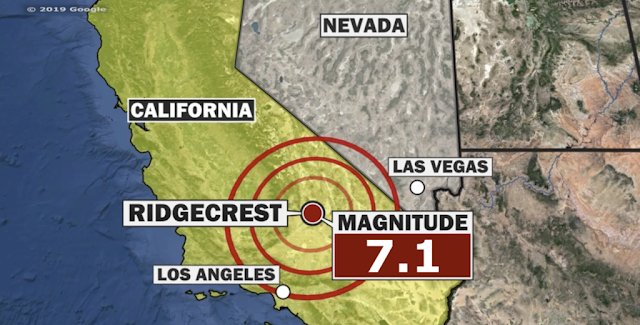 A 7.1 magnitude earthquake hit a large portion of Southern California late Friday night, one day after a 6.4 magnitude quake shook the same area.

The Friday night quake, which struck 11 miles northeast of Ridgecrest, marks the largest in Southern California in at least 20 years, The Associated Press reported.

Friday's quake was five times bigger than the earthquake that struck near Ridgecrest one day earlier, according to the U.S. Geological Survey (USGS).

The quake cracked buildings and foundations, destroying roads and causing fires to break out. The earthquake was followed by several aftershocks — some of which surpassed magnitude 5.0, the AP reported. Authorities reported several minor injuries following the earthquake.

Gov. Gavin Newsom (D) activated the state’s Office of Emergency Services operation to its highest level to coordinate emergency response to the quake.

By Saturday morning, Newsom had declared a state of emergency for San Bernardino County.

"On behalf of all Californians, I offer my heartfelt support to those affected by tonight's earthquake near Ridgecrest," he said in a statement.

The San Bernardino County Fire Protection District tweeted Saturday morning that numerous gas leaks had been reported and that crews continued to patrol affected areas throughout the night.

The shaking could be felt as far away as Las Vegas and New Mexico, the USGS said.

Aftershocks are expected to continue for the next several days, and there’s about a 10 percent chance that another 7.0 magnitude earthquake could hit the area within the next week, Lucy Jones, a seismologist at the California Institute of Technology and a former science adviser at the USGS, told the AP.

Jones added that aftershocks from the new main quake could occur for years, predicting that the chance of a 5.0 magnitude quake “is approaching certainty.”