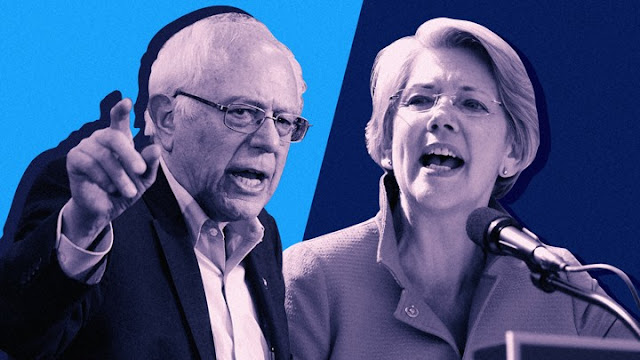 The top matchup of Tuesday night’s Democratic presidential debate will be between Sens. Bernie Sanders (I-Vt.) and Elizabeth Warren (D-Mass.), two of the primary field’s most prominent liberals vying for the support of the party’s progressive base.

But with eight other candidates on stage, there will be plenty to watch for when the second round of presidential debates kicks off in Detroit this week.

Here are five things to watch for during the Tuesday night showdown:

1. How will Warren and Sanders handle one another?

Warren and Sanders have long carried on a cordial relationship, even meeting in the final weeks of 2018 to discuss their impending presidential campaigns.

But that was before the two candidates found themselves neck and neck for second place behind former Vice President Joe Biden and competing for the support of many of the same liberal and progressive primary voters.

Whether the Sanders-Warren peace treaty holds up when they go head to head on the debate stage for the first time is one of the biggest question marks hanging over the Tuesday-night showdown.

Aides and advisers to both candidates have downplayed the prospect of a confrontation between the two senators, asserting that they are intent on making the Democratic primary a contest of ideas rather than a bitter political brawl.

Still, while they have long maintained a cordial political relationship, they will inevitably find themselves pitching a similar message to a similar support base, and how they handle each other in the midst of the debate could test the resolve of their non-aggression pact.

2. Will some candidates go on the attack?

If the first round of debates in June carried any lessons for the candidates, it was that a showdown with a top-tier candidate can pay dividends in the form of polling gains and fundraising boosts. Indeed, Sen. Kamala Harris (D-Calif.) saw such payoffs after her high-profile confrontation with Biden over school busing.

While more attention has been paid to the possibility of another clash between Harris and Biden – or even Biden and Sen. Cory Booker (D-N.J.) – during Wednesday’s debate, it will be interesting to see whether any of the candidates on Tuesday night will go on the attack.

Several middle- to lower-tier candidates have little to lose by going on offense, and a heated exchange with one of top-tier hopefuls could end up being the shot in the arm their campaigns need.

But there’s still some risk involved. Top-tier candidates are usually in the top tier because they’re popular with voters, and an attack on them seen as unfair or unnecessary could backfire. At the same time, few if any candidates want to be accused of going negative, especially this early in the cycle.

Whether someone is willing to take that risk on Tuesday remains to be seen.

3. What can Buttigieg do to regain some momentum?

Pete Buttigieg entered the presidential race as a relative unknown on the national stage. That changed in March, however, with a surge of media exposure that helped boost the South Bend, Ind. mayor’s candidacy to top-tier status.

But his performance in the first Democratic debate last month was relatively muted. He delivered a well-received response to questions about the fatal police shooting last month of a black man in South Bend, but made little noise after that.

What’s more, his polling numbers have remained relatively stagnant since the debate, with most recent surveys showing him hovering between 4 and 7 percent. Tuesday night’s debate will give him another chance to stand out and inject new energy into his campaign.

Buttigieg will have something the second time around that he didn’t in the first round of debates: new policy proposals. He’s rolled out a handful of plans this month, including one to boost national service and another aimed at combating “racist structures and systems” in the U.S., dubbed the Douglass Plan after the famed abolitionist Frederick Douglass.

4. Can O’Rourke revive his campaign?

For all the fanfare that surrounded Beto O’Rourke’s 2018 campaign against Sen. Ted Cruz (R-Texas) and the subsequent launch of his presidential campaign, the former Texas congressman has struggled to gain sustainable traction in the primary contest.

He is consistently polling in the low single digits and raised only $3.6 million in the second quarter of 2019 – little more than half the amount he raised in the 24 hours after announcing his candidacy for the Democratic presidential nomination.

O’Rourke will have a chance on Tuesday night to distinguish himself from the pack and recapture some of the Democratic enthusiasm that helped propel him into the national spotlight in the first place.

One area in which O’Rourke may try to stand out on Tuesday night is immigration. He’s ramped up his outreach on the issue in recent weeks, visiting three detention centers where migrants are being held and headlining a rally outside a Border Patrol facility in Texas.

Regardless of whether he scores big at Tuesday’s debate, it won’t be O’Rourke’s last chance to make an impression on the debate stage. He’s already met the steeper requirements to qualify for the third Democratic debate in September.

5. Will a centrist rival to Biden emerge?

Biden has so far carried the mantle of the party’s moderate wing in the primary contest. But a handful of other candidates, Sen. Amy Klobuchar (D-Minn.), former Colorado Gov. John Hickenlooper and Montana Gov. Steve Bullock among them, have also cast themselves as compromise-minded centrists, and the debate could give them to stand out on that front.

In sharing a debate stage with Warren and Sanders, the field’s two most progressive candidates, the moderates will have the chance to draw sharp contrasts on policy and political style.

A confrontation with one of the top-tier progressives could also lend much-needed momentum to the more moderate candidates’ campaigns. Klobuchar is polling consistently in the low single digits, while Hickenlooper and Bullock are faring even worse.

Whether one of them will be able to successfully make the argument that a centrist will fare better against President Trump than a progressive will be one of the night’s major tests.