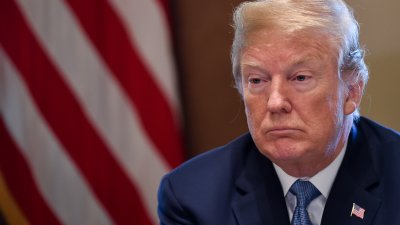 A federal judge in San Francisco Wednesday issued a preliminary injunction blocking the Trump administration's effort to restrict migrants’ ability to apply for asylum in the U.S., hours after a judge in Washington, D.C., ruled the opposite way.

The rule announced earlier this month by the departments of Justice and Homeland Security would make asylum-seekers who pass through another country before reaching the U.S. ineligible for asylum.

There are exceptions in the rule for victims of trafficking and migrants who have been denied asylum in the countries they traveled through.

In his order, Tigar said the rule is likely invalid because it contradicts existing asylum laws created by Congress.

He also described the rule as "arbitrary and capricious," noting that asylum seekers will not have "a safe and effective alternative via other countries’ refugee processes."

The three organizations praised the injunction on the rule which they say violates domestic and international law.

“The court recognized, as it did with the first asylum ban, that the Trump administration was attempting an unlawful end run around asylum protections enacted by Congress," ACLU attorney Lee Gelernt said in a statement.

Tigar, an Obama-era appointee, last year blocked an administration effort to remove the protection to anyone who did not enter the U.S. through a legal port of entry.

Earlier in the day Wednesday, U.S. District Judge Timothy J. Kelly of the District of Columbia denied a motion for a temporary restraining order in a separate legal challenge on the rule.

That challenge had been brought by the Capital Area Immigrants’ Rights Coalition and the Refugee and Immigrant Center for Education and Legal Services.

When Kelly’s decision was brought up at the hearing in San Francisco, Tigar said that ruling was not binding on his own decision.