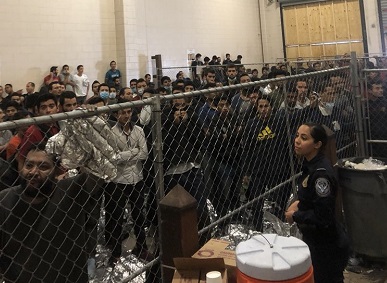 Vice President Pence said he was "not surprised" by what he saw when he visited migrant detention facilities near the U.S.-Mexico border Friday as reporters at the scene described some areas as overcrowded with a "horrendous" stench.

"I was not surprised by what I saw," Pence said after touring a facility near McAllen, Texas. "I knew we'd see a system that was overwhelmed."

The facility Pence visited is a border processing center, which has been criticized by the Department of Homeland Security's inspector general for giving substandard care to migrants.

The facility is a tent complex that opened in early May and holds 8,000-square-foot pods that reportedly have space for restrooms, showers and laundry facilities.

Pence spent part of his visit speaking with detained migrant children in a facility described as being cleaner and having cots for sleeping and medical supplies readily available. But later, reporters and the vice president briefly entered another area where almost 400 men were being held.

In a White House pool report, Washington Post reporter Josh Dawsey described seeing more than 380 men behind fences with no pillows or mats to sleep on and not enough space for everyone to lie down. Dawsey said men told reporters they had not showered in weeks and did not always have access to toothbrushes and food.

Pence has repeatedly called on Congress to act to improve conditions at the border. He said, “we’ve got to get to the root causes” of the reported conditions in border facilities in an interview last month.

"No American should approve of this mass influx of people coming across our border," Pence told CNN. "I was at the detention center in Nogales, [Ariz.]. ... It is a heartbreaking scene. These are people who are being exploited by human traffickers. ... Congress has to act."

His visit to the border comes as questions of migrant border facility centers' living conditions are at the center of political debate. Twelve people have died in the custody of U.S. immigration authorities since September, including several ill children.