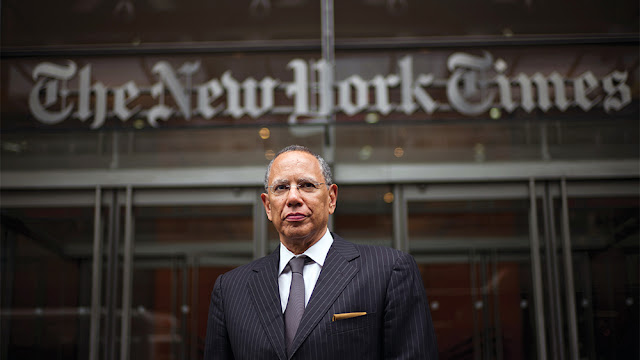 New York Times executive editor Dean Baquet is predicting that "most local newspapers are going to die in the next five years."

"The greatest crisis in American journalism is the death of local news," Baquet said at the International News Media Association World Congress in New York City on Friday. "I don't know what the answer is.

"Their economic model is gone. I think most local newspapers in America are going to die in the next five years, except for the ones that have been bought by a local billionaire," Baquet continued.

"I think that everybody who cares about news — myself included, and all of you — should take this on as an issue," the 62-year-old Pulitzer Prize winner added. "Because we’re going to wake up one day and there are going to be entire states with no journalism or with little tiny pockets of journalism.

"I’m not worried about Los Angeles and New York. I don’t know what the model is for covering the school boards in Newark, N.J. That makes me nervous,” he said.

Baquet has been the New York Times executive editor since May 2014.

The local newspaper industry has been plagued by layoffs in the digital era and several struggling publications have been sold to hedge fund-led entities.

Digital First Media, for example, owns approximately 200 publications across the country, including the Denver Post, Detroit News and Boston Herald. All have experienced considerable layoffs in recent years. Papers have seen revenue decreases largely due to drops in print advertising and an increasingly oversaturated market in the digital space.

More than half of the largest newspapers in the U.S. have laid off employees since January 2017, according to a 2018 Pew Research Center study.

Pew found that nine of the 16 newspapers with circulations of 250,000 or more, or 56 percent, had experienced layoffs during a 16-month period ending in April 2018.

The New York Times has been one of the few exceptions as it continues to increase its employee payroll while seeing record revenue.

The paper reported first-quarter results exceeding analyst expectations earlier this month, with the 167-year-old company showing increases in digital advertising and subscriptions that eclipse its continued decline in print revenue.

The Times's total number of paid subscriptions surpassed 4.5 million, an all-time high for the company. Of that number, more than 3.5 million were digital.