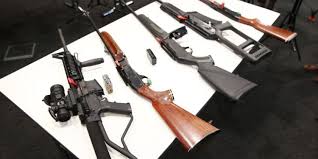 The buyback in Christchurch, where a pair of mosque shootings left 51 dead earlier this year, is the first of many planned this year, according to NPR.

Mike Johnson, police commander for the Canterbury Region, which includes the city of Christchurch, said that owners turned over 224 semiautomatic weapons, as well as 200 gun parts, NPR noted.

The network reported that the owners received a combined equivalent of approximately $300,000.

Johnson told reporters that he was "ecstatic" by the amount of gun owners that showed up.

The program occurred months after a gunman opened fire at multiple mosques. The alleged gunman is currently facing 51 charges of murder, 40 charges of attempted murder and one charge of committing a terrorist attack, according to reports. He has pleaded not guilty to the charges.

New Zealand Prime Minister Jacinda Ardern announced shortly after the shooting the country would ban the sale of all assault rifles and semi-automatic guns. During the announcement, she said that a  buyback program would be implemented to offer "fair and reasonable compensation" to owners.

She said at the time that the buyback program was estimated to cost between $100 million and $200 million, but said it was a necessary price "to ensure the safety of our communities."

NPR noted that about 250 buyback exchanges are scheduled this year.