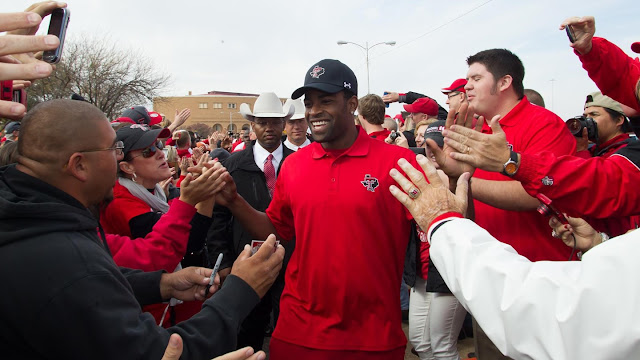 Texas Tech Athletics announced Tuesday it has received a $100,000 matching gift from Red Raider great and NFL veteran Michael Crabtree that will fully endow a scholarship in his name.

With the gift, the Michael Crabtree Endowed Scholarship will be presented annually to a wide receiver, recognizing the same position Crabtree starred at from 2007-08 when he was a two-time first team All-American and the first two-time winner of the prestigious Biletnikoff Trophy.

“When you think of the all-time greats at the wide receiver position in college football, Michael Crabtree immediately jumps to the top of any list,” Director of Athletics Kirby Hocutt said. “Michael Crabtree’s success as a Red Raider is unmatched, and we couldn’t be more fortunate that he has invested in our football program and the experience of so many future student-athletes with this commitment.”

Crabtree has enjoyed successful stints with the San Francisco 49ers, Oakland Raiders and Baltimore Ravens since helping lead Texas Tech to one of its most memorable seasons in school history in 2008. The Red Raiders finished 11-2 overall that season with an appearance in the Cotton Bowl after sharing the Big 12 South regular-season title.

In addition to his role on the field, Crabtree has contributed significantly off of it, not only with his investment to his alma mater but also by establishing the Crab5 Foundation, which benefits inner-city youth through cultural activities, arts, music, sports and academics.

“Texas Tech will always be home to me,” said Crabtree, who has caught 633 passes for more than 7,400 yards during his 10-year NFL career. “The game of football has blessed my family, and I couldn’t be prouder to now give back to hopefully make that same type of impact on fellow Red Raiders for years to come.”

The remainder of the $200,000 endowed scholarship was gifted to Texas Tech Athletics through a crowd-funding initiative started by the passionate fans at RedRaiderSports.com, a news and fan forum on the Rivals network.

The grassroots campaign began with a simple post from longtime Texas Tech supporter Terry Fuller, who called on his fellow Red Raiders to generously support the fundraising goal with the backing of Crabtree to match $100,000 in donations.

“The passion and support of our alumni from across the world is nothing short of impressive,” said Fuller, the namesake (along with his wife) of the Terry and Linda Track and Field Complex. “This is another reminder that every gift matters, no matter the amount. I’m proud to have joined with so many members to make this scholarship a possibility and invest in the lives of many future Red Raiders.”