McConnell says Trump not racist: Calls on both parties to tone down rhetoric 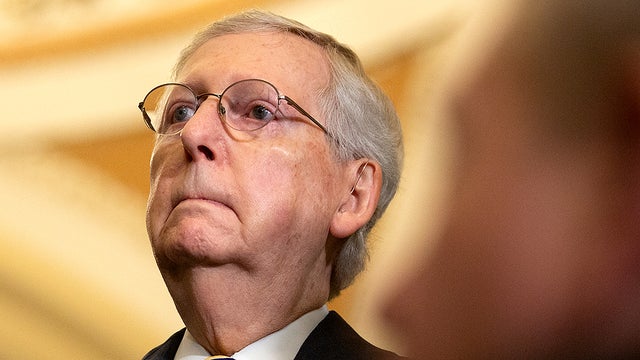 Senate Majority Leader Mitch McConnell (R-Ky.) on Tuesday urged Democrats and Republicans to tone down their rhetoric but defended President Trump from charges of racism after he tweeted over the weekend that minority Democratic lawmakers should "go back" to where they came from.

"The president is not a racist," McConnell declared, after reporters pressed him hard on whether Trump's tweets were racist or whether the GOP leader himself would ever use such language.

Instead McConnell said both sides were guilty of "overheated" rhetoric.

“I think the tone of all of this is not good for the country but it’s coming from all different ideological points of view. To single out any segment of this I think is a mistake,” he said, defending Trump from recent criticism from Democrats.

In his prepared remarks, McConnell said: "I think there’s a consensus that political rhetoric has really gotten way, way overheated all across the political spectrum," he said.

"Lower all this incendiary rhetoric. Everyone should do it," he added in response to a question.

McConnell pointed to claims by House Democrats such as Rep. Alexandria Ocasio-Cortez (D-N.Y.) that immigrant detainment centers are like “concentration camps” and what he called “anti-Semitic tropes” fanned by another Democratic freshman, Rep. Ilhan Omar (D-Minn.).

“We’ve seen the far left throw accusations of racism at everyone, anyone who disagrees with them on anything, including the Speaker of the House,” he noted, referring to the claim by Ocasio-Cortez last week that Speaker Nancy Pelosi (D-Calif.) had singled out minority women lawmakers for criticism.

“From the president, to the Speaker, to freshmen members of the House, all of us have the responsibility to elevate the public discourse,” he said, addressing his comments to Trump as well as members of Congress.

Omar and Ocasio-Cortez are two of the four Democratic congresswomen targeted by Trump's tweets and subsequent remarks. All four women are U.S. citizens and members of minority groups, with Omar the only one who was born outside the United States.

“Our words do matter,” he said, urging his fellow leaders and member of Congress to tone down their rhetoric without singling out Trump for criticism.

“All of us ought to contribute to a better level of discourse,” he added.

When asked by reporters what he would do if someone told his wife, the secretary of Transportation and an immigrant from Taiwan, to go back to her home country, McConnell noted she came to the country legally.

He said his wife, Elaine Chao, “came here at age eight, legally, not speaking a word of English and has realized the American Dream.”

“Legal immigration has been a fulfilling of the American Dream,” he said. “The new people that come here have a lot of ambition, a lot of energy, tend to do very well and invigorate our country. My wife’s a good example of that,” he said.

“I’m obviously a big fan of legal immigration. It’s been a big part of my family for a quarter of a century,” he added.