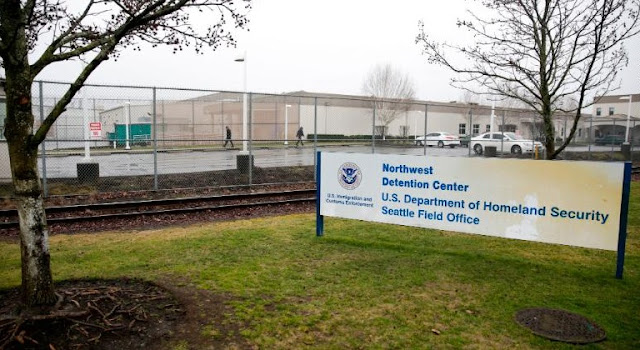 A man who was armed with a rifle and throwing Molotov cocktails at an ICE detention center in Tacoma, Washington was killed by responding police officers on Saturday, police said.

Tacoma Police responded to the Northwest Detention Center, a privately run detention facility that holds migrants, at about 4 a.m. on Saturday after an employee called about an armed man outside, authorities said.

The Washington state man, who has not been publicly identified, was armed with a rifle and throwing “incendiary devices” at the building and nearby cars, setting one on fire. The incident comes one day before ICE agents are expected to carry out mass raids around the country in an effort to round up undocumented migrants.

According to The News Tribune, the man was throwing Molotov cocktails—handmade bottles filled with flammable liquid.

“The male attempted to ignite a large propane tank and set out buildings on fire,” a statement released by the Tacoma police department said. “The male continued throwing lit objects at the buildings and cars.”

Four officers arrived at the scene and called to the man, who was also wearing satchel and carrying flares, before reporting “shots fired,” police said. It is not immediately clear if the police or the man shot first or who fired the fatal shot. After medical aid arrived, the officers approached the man, who “appeared to still have his weapon” near him and “determined that he had been shot” and killed at the scene.

The four male officers involved—none of whom were injured—were placed on paid administrative leave, which is standard practice, until the investigation is complete, Tacoma police said. An ICE spokesperson also confirmed the shooting and said no employees were hurt.

The Northwest Detention Center, which is a U.S. Department of Homeland Security facility for migrants pending deportation proceedings.

A police spokesperson said there was a planned “peaceful rally” outside the detention center that houses over 1,500 detainees on Saturday afternoon, which will now be held in another location due to the ongoing investigation.The shooting comes the day before President Donald Trump’s ordered national raid by ICE, targeting hundreds of immigrants who have received deportation orders.

It is not immediately clear whether the incident about an hour outside of Seattle is connected to the Sunday raids.