Lindsey Graham: Trump should 'knock it down a notch' 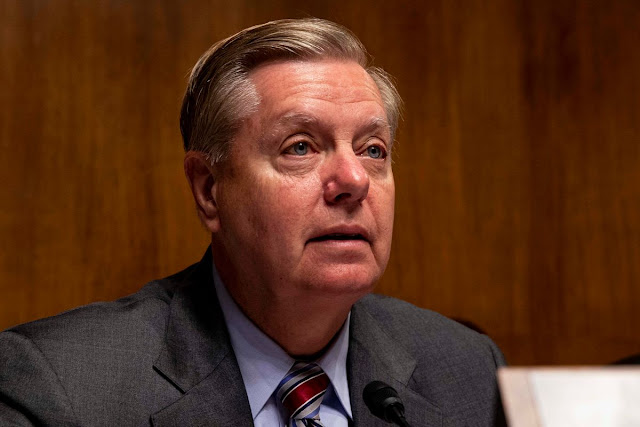 Sen. Lindsey Graham (R-S.C.) on Monday urged President Trump to "knock it down a notch" in the wake of incendiary tweets in which Trump said progressive congresswomen should "go back" to the countries they came from.

In an appearance on "Fox & Friends," Graham said Trump should focus on criticizing Democratic policies rather than personal attacks. But the senator quickly launched into his own attacks on the congresswomen, saying they "hate our own country."

"I think they’re American citizens who are duly elected that are running on an agenda that is disgusting, that the American people will reject," said Graham, one of the president's closest allies on Capitol Hill.

The president sparked an uproar on Sunday morning when he tweeted that unnamed progressive congresswomen "who originally came from countries whose governments are a complete and total catastrophe" should "go back and help fix the totally broken and crime infested places from which they came."

Trump did not specify which lawmakers he was referring to, but the comments were widely interpreted as targeting Reps. Alexandria Ocasio-Cortez (D-N.Y.), Ilhan Omar (D-Minn.), Rashida Tlaib (D-Mich.) and Ayanna Pressley (D-Mass.). All four are U.S. citizens, and only Omar, who came to the U.S. as a refugee from Somalia, was born outside the U.S.

The president doubled down on Sunday night and into Monday morning, suggesting the Democratic lawmakers should apologize to the country and his office.

Graham spent Saturday afternoon golfing with Trump at the president's property in Virginia. The South Carolina Republican is one of just a couple of GOP lawmakers to speak out on Trump's tweets, which Democrats have universally condemned as racist.

"Aim higher," Graham said when asked if Trump's tweets went too far. "They are American citizens. They won an election. Take on their policies. The bottom line here is this is a diverse country."

Graham offered his own blistering attacks on Ocasio-Cortez and other progressive Democrats, calling them "socialist" and "anti-Semitic."

"They wanted to impeach Trump on day one," the senator said. "They’re socialist, they’re anti-Semitic, they stand for all the things that most Americans disagree with. Make them the face of the future of the Democratic Party."