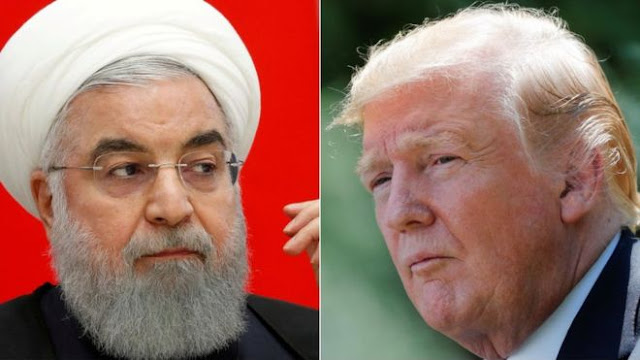 President Trump’s challenges with Iran mounted on Monday after Tehran claimed to detain more than a dozen citizens it alleged are CIA spies.

Regardless, they added, Iran’s flexing of its security apparatus represents the latest in a back-and-forth of escalating U.S.-Iran tensions, coming on the heels of Iran’s seizure of a British-flagged oil tanker.

And while Trump has intermittently expressed a desire to talk with Iran, on Monday he indicated his window is narrowing.

U.S.-Iran tensions have been increasing since Trump withdrew from the 2015 nuclear deal last year, but spiked considerably in May as Trump further tightened sanctions and the United States deployed more forces to the region to respond to unspecified Iranian threats.

Since then, the tit-for-tat has seen Iran shoot down a U.S. drone, Trump come within minutes of launching a military strike on Iran, the U.S. military downing an Iranian drone and attacks on oil tankers near the Gulf that the United States has blamed on Iran, among other incidents.

On Monday, Iran's Intelligence Ministry announced the arrests of 17 Iranian citizens, alleging they had been recruited by the CIA to collect information on the facilities where they worked in exchange for U.S. visas or jobs in America.

Iranian officials said some of the 17 have already been sentenced to death, without specifying how many. Others, they said, have flipped and are now working with Iran against America.

U.S. officials dismissed Iran’s announcement as a lie. On Twitter, Trump called Iran’s allegation “totally false,” adding that it was “just more lies and propaganda” from a country that is “a total mess!”

In an interview on Fox News, Secretary of State Mike Pompeo declined to discuss specifics of the situation, but similarly called out Iran’s “long history of lying.”

“It’s part of the nature of the ayatollah to lie to the world,” Pompeo said on “Fox and Friends.” “I would take with a significant grain of salt any Iranian assertion about actions that they’ve taken.”

It is not uncommon for Iran to announce that it has busted a foreign spy ring every few months or years, said Ali Vaez, Iran project director at the International Crisis Group.

In April, for example, Iran claimed to have identified 290 U.S. spies around the world.

But the timing of Monday’s announcement indicates it’s part of Iran’s response to the ongoing tit-for-tat with the United States, he added.

“The Iranians see themselves under siege,” Vaez said. “They don’t perceive just an economic warfare being waged against them by the Trump administration. They see multidimensional conflict, which has different elements, information warfare, covert operations. And as such, for a government that even on a good day is quite paranoid, it is not entirely unexpected for them to have the perception that there are really people out there to get them.”

Fitting into the continuum of the months-long U.S.-Iran face-off is also Iran’s Friday seizure of a British-flagged oil tanker.

The Britain-Iran tanker showdown started in early July when the Iranian-flagged Grace 1 was detained off the coast of the British-territory Gibraltar over allegations it was smuggling oil to Syria in violation of European Union sanctions.

Iranian forces unsuccessfully tried to board a British tanker in mid-July. On Friday, the Stena Impero was transiting the Strait of Hormuz when it was boarded by Islamic Revolutionary Guards Corps forces and redirected toward Iran.

The Strait of Hormuz is a strategic chokepoint through which a fifth of the world’s oil travels.

A British frigate that was nearby Friday tried to warn Iran off, but was unable to reach the tanker in time.

Iran alleges the Impero was violating international law, while the United Kingdom has accused Iran of an “act of state piracy.”

Asked Monday about the U.S. role in securing the Impero’s release, Pompeo said it “falls to the United Kingdom to take care of their ships.”

But the United States over the past few weeks has been trying to convince allies to join a military coalition to protect vessels transiting the Gulf region. Dubbed Operation Sentinel, the plan would see U.S. allies escorting ships sailing through the Persian Gulf, the Strait of Hormuz and the Gulf of Oman, while the U.S. military would act in a support role.

No allies, though, have announced they are joining the Operation Sentinel effort.

Britain announced its own plan Monday to form a European-led maritime security initiative.

In an address to Parliament, British Foreign Secretary Jeremy Hunt said the effort would “complement” the U.S. plan, but that “it will not be part of the U.S. maximum pressure policy on Iran because we remain committed to preserving the Iran nuclear agreement.”

“If Iran continues on this dangerous path, they must accept the price will be a larger Western military presence in the waters along their coastline, not because we wish to increase tensions but simply because freedom of navigation is a principle which Britain and its allies will always defend,” Hunt added.

Behnam Ben Taleblu, a senior fellow at the Foundation for Defense of Democracies, said the Trump administration will need to find unity with Europe on maritime security.

“It’s imperative for the U.K. to put forward it’s plan, which I think we’re still fully waiting on, and then have Washington do everything it can, not to co-opt that plan, but to make sure when it comes to maritime security that there is no transatlantic gap as there is on the JCPOA,” Taleblu said, using the acronym of the official name for the nuclear deal.