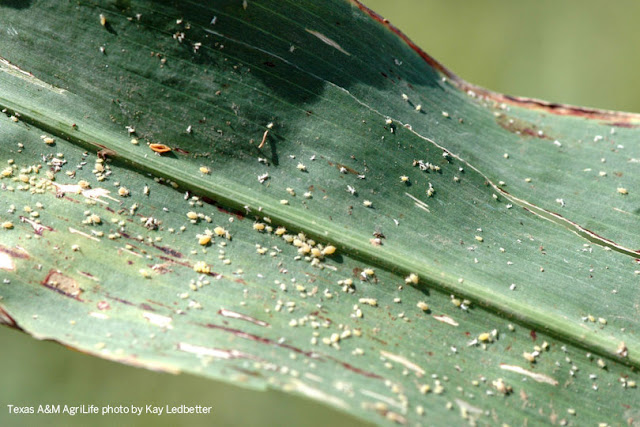 Insect pressure hasn’t been as strong for row crops in 2019, according to Texas A&M AgriLife Extension Service experts.

Despite the light pressure, farmers should still be on the lookout for possible infestations.

Corn from Central Texas to the Oklahoma border is drying down, Knutson said, which lowers the risk of insect damage.

“There have been relatively few insect problems in corn,” he said. “Mexican corn rootworms were present in some fields earlier, and spider mites bear watching in later-planted fields.”

Numerous replants in the South Plains have left most corn crops in varied stages, Reed said.

While sorghum in North Texas has finished flowering, headworms, stinkbugs and sugarcane aphids are the largest concerns for farmers, Knutson said. But thanks to many in the area planting aphid-tolerant sorghum hybrids, pressure is low in the area. Hybrids planted in South Texas also reduced the number of aphids headed to North Texas.

“Sugarcane aphids have been generally light throughout the area but can increase rapidly even late in the season,” he said. “Producers should monitor fields twice a week for sugarcane aphids and honeydew accumulation on leaves and grain heads, which can make harvest very difficult.”

Pest populations may be down, but growers should still stay vigilant, Reed said.

“This could be a long season for watching pests such as sorghum midge and many others with such a wide range of blooming time frames in the same area,” he said. “It could prove likely that the pest populations could build larger with each ‘generation’ of crop development, reaching levels that would be quite high by the fall for the latest fields.”

Bollworms remain the key pest for cotton, Knutson said. Farmers can benefit from insects that feed on bollworms, but they can be overwhelmed by large amounts of bollworm eggs.

“All cotton, especially varieties with two Bt genes for resistance, should be scouted weekly for bollworms to determine if an insecticide is needed,” he said.

South Plains cotton is varied in stages, Reed said. Many fields were dealing with pests, but beneficial insects and weather conditions have helped.