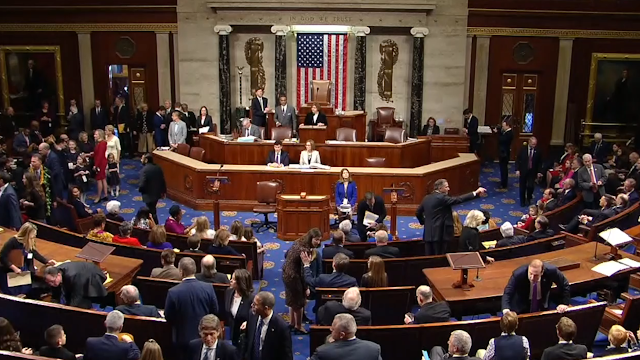 The House passed a two-year budget deal Thursday that lifts the debt ceiling and boosts government spending by $320 billion.

The legislation would suspend the debt limit through July 2021 and increase spending caps for the next two years, putting the U.S. on track to add an estimated $1.7 trillion to the deficit over the next decade when compared with the billions in automatic spending cuts that would otherwise kick in.

Lawmakers passed the package in a 284-149 vote. Sixty-five Republicans voted for the measure, and 16 Democrats voted against it.

The legislation now heads to the Senate, which is expected to pass it next week before senators leave town for the August recess.

The bill’s passage comes just days after President Trump signed off on a deal reached between administration officials, Speaker Nancy Pelosi (D-Calif.) and other congressional leaders.

The legislation would ramp up defense spending to $738 billion and $740 billion over the next two fiscal years, respectively, compared with the current level of $716 billion.

Nondefense spending would rise to $632 billion and $634.5 billion during the same period, an increase from this year’s $605 billion.

But the spending increases drew criticism from conservatives who blasted what they called a lack of fiscal restraint.

Trump, whose initial budget proposal called for a 10 percent cut to nondefense spending while supercharging defense, tried to give conservative lawmakers political cover by reiterating his support for the deal in a Thursday morning tweet.

“House Republicans should support the TWO YEAR BUDGET AGREEMENT which greatly helps our Military and our Vets. I am totally with you!” he wrote.

House GOP leaders this week touted their wins in the deal: a major boost to defense spending, provisions that would ban so-called poison pill riders from spending bills over the next two years and $77 billion in cuts or revenue-raisers to help offset some of the bill's costs.

House Minority Whip Steve Scalise (R-La.) noted before the vote that while there is more that he would have liked to have seen in the bill, Republicans are faced with the reality of a divided Congress that limits their ability to obtain everything they want in major legislation.

"You know, any time you have a big budget deal ... it's tough rounding up votes for it, because everybody can find something they don't like,” he told reporters Wednesday.

The legislation’s addition of $320 billion to the deficit over the next two years, however, proved too difficult a sell for some Republicans.

House Freedom Caucus Chairman Mark Meadows (R-N.C.), one of Trump’s closest allies in the lower chamber, said that while he could not support the bipartisan deal, he had no intention of trying to make the president reconsider.

"I'm not trying to get him to flip," Meadows, who met with Trump on Wednesday, told reporters. “I think I've made my case as best as I can make it and compromise is something that you have to accept. I've been able to make a compelling case on why I feel like a different course is a better course of action, but the president saw it differently and I respect that.”

In December, conservative lawmakers and commentators convinced Trump to not sign a Senate-passed stopgap spending bill, which paved the way for a 35-day partial government shutdown, the longest in U.S. history.

Budget hawks this time around railed against the two-year budget deal.

“So-called Republican ‘leadership’ should be ashamed that they even considered this deal in the first place,” said Adam Brandon, president of FreedomWorks.

Leon Panetta, a Defense secretary under former President Obama who now co-chairs the Committee for a Responsible Federal Budget, called for a bipartisan commission to address the debt.

“Both sides this week so easily agreeing to fiscal defeat isn't bipartisanship, it is broken governance,” he said.

Since Trump took office, the debt has grown from just under $20 trillion to more than $22 trillion. While mandatory spending remains the largest driver of deficits, the 2017 GOP tax law is projected to add $1.9 trillion to the deficit over a decade, and bipartisan deals to increase defense and domestic spending, like the one this week, have added billions more.

But congressional appropriators argued the outcome was par for the course and that a good deal would have detractors on both sides.

“There's a lot of people that will never vote for debt ceiling on our side regardless,” said Rep. Tom Cole (R-Okla.). “If you’re a Democrat, you’re going to be upset. ‘What, I can’t put any of our policy riders in approps bills for two years,’ or ‘that’s too much money on defense and we reduced what we wanted domestically.’”

Pelosi kept Democrats largely united in the vote, a turnaround from a showdown earlier in the year in which progressive opposition to the Democratic budget prevented a floor vote. Progressives had complained that defense spending rose too much and that there were not enough resources directed toward other areas of federal discretionary spending.

“Before a lot of it was theoretical,” said Rep. Mark Pocan (D-Wis.), who co-chairs the Congressional Progressive Caucus. “What are you going to get right now? You're getting a lifting of the debt ceiling for two years, you're making sure there's no sequester. I mean, there's actual substance that is meaningful to Democrats. That's the difference."

By raising the final two years of spending caps set forth in the 2011 Budget Control Act, the deal effectively ends the threat of severe automatic spending cuts known as sequestration that were intended to force a compromise in debt reduction.

The House is expected to adjourn for a six-week August recess following the vote. Senate Majority Leader Mitch McConnell (R-Ky.) said the upper chamber will take up the measure early next week, before the Senate leaves town for its own break.

“Considering the circumstances of divided government, this is a good deal,” McConnell said.