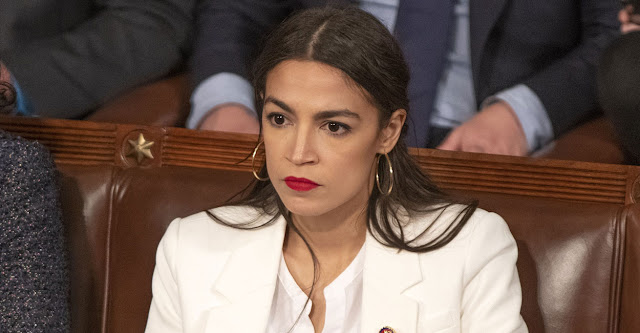 The House Democratic Caucus issued a rebuke of Rep. Alexandria Ocasio-Cortez’s (D-N.Y.) chief of staff Friday evening amid a public spat between House leadership and a small group of progressive members.

The caucus hammered Saikat Chakrabarti for comments he made going after Rep. Sharice Davids (D-Kan.), who is Native American. Chakrabarti said in the quoted tweet that Davids had taken votes that “enable a racist system.”

“Who is this guy and why is he explicitly singling out a Native American woman of color? Her name is Congresswoman Davids, not Sharice. She is a phenomenal new member who flipped a red seat blue. Keep Her Name Out Of Your Mouth,” the House Democratic Caucus tweeted Friday evening.

Chakrabarti pushed back, calling Davids a friend and emphasizing that his previous tweets were aimed at calling out a "terrible border funding bill that 90+ Dems opposed," saying it "gave Trump a blank check to continue caging people in horrendous conditions."

Justice Democrats, a prominent progressive group that supported Ocasio-Cortez’s long-shot congressional bid last year and gained national renown after her victory, also fired back at the caucus, noting that Speaker Nancy Pelosi (D-Calif.) urged members this week to not tweet their grievances against other colleagues.

The feuding began when Chakrabarti, in a now-deleted tweet, described centrist Democrats last month as "new Southern Democrats" that "certainly seem hell bent to do to black and brown people today what the old Southern Democrats did in the 40s."

Pelosi on Thursday said the tweet offended a number of Democrats and scolded her party at a closed-door meeting this week.

“So, again, you got a complaint? You come and talk to me about it. But do not tweet about our Members and expect us to think that that is just OK,” she said, according to a source in the room.

Ocasio-Cortez then in an interview with The Washington Post accused Pelosi of singling out women of color for criticism, seeming to reference a group of four outspoken, progressive congresswomen including herself, known as “the squad.”

Pelosi said at a press briefing the next day that the closed-door meeting was called after members took offense to Chakrabarti’s tweet, but appeared intent to prevent the infighting from escalating.

"But I'm not going to be discussing it any further," Pelosi said. "I said what I'm going to say."

The public feud has deepened the rifts among House Democrats between centrists and progressives and between freshmen and leadership, with some worrying that the disputes could hinder unity on key pieces of legislation.

"I don't really want to get into this back and forth. I would hope it would stop," House Majority Leader Steny Hoyer (D-Md.) told reporters on Thursday.