House and Senate head for showdown over defense bill 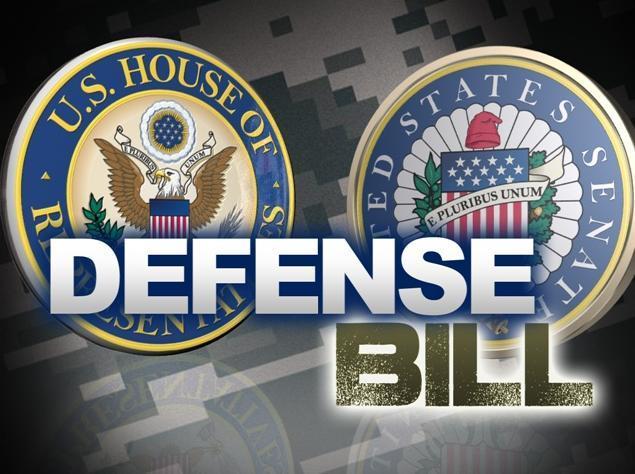 The House and Senate are headed for a fight over the annual defense policy bill after the House loaded its version with progressive priorities to get it through the chamber on Friday.

Senate Republicans say the House amendments are non-starters for them in bicameral negotiations over the final product.

It's unclear how hard Democrats will fight to keep the provisions, with Democratic House Armed Services Committee leaders saying the most important goal is to get a bill to the president's desk.

That means liberal victories, such as amendments to block military action against Iran and reverse the transgender military ban, could be short lived. It also adds uncertainty to the timing and fate for final passage of a bill long considered must-pass.

For now, Democrats aren’t tipping their hand at their strategy for the negotiations.

“I’m not going to answer a hypothetical like that,” House Armed Services Committee Chairman Adam Smith (D-Wash.) said Friday when asked what he would do if it came down to completing the bill or keeping the progressive amendments.

“We’re going to get it done, and we’re going to try to respect and honor members’ contributions to the bill as we do that,” Smith added.

The House passed its version of the National Defense Authorization Act (NDAA) in a party line, 220-197 vote. With every Republican voting against the bill, which the White House has threatened to veto, Democrats needed progressive backing to pass it.

In order to win support from progressives, who were concerned about the $733 billion price tag, Democrats lined up amendments on several of their priorities.

The House approved amendments to block emergency arms sales to Saudi Arabia, end U.S. military support to the Saudi-led coalition in Yemen, repeal the 2002 authorization for the use of military force, give federal employees 12 weeks of paid family leave, prohibit military parades for political purposes and ban Pentagon funds from being used at Trump-owned properties.

The Senate bill includes none of that. It also costs $17 billion more, with a topline of $750 billion.

The Senate approved its version of the bill in a bipartisan, 86-8 vote last month.

Senate Armed Services Committee Chairman Jim Inhofe (R-Okla.) said this week the amendments in the House version will have to come out.

But he also expressed confidence he and Smith can work together. Inhofe and Smith both said they spoke to each other recently about the need for a successful conference.

“We both have the commitment, we’ve got to get a bill,” Inhofe said. “The main thing that I wanted out of the House was to get something out of the House into conference, and then we can go to work.”

“We both agree that we know we have to get this done,” he said.

The top Republican on the House Armed Services Committee, Rep. Mac Thornberry (Texas), appeared Friday to doubt whether the bill, which has been signed into law for nearly 60 years straight, can be completed this year.

On the House floor, Thornberry said he hoped the NDAA didn’t become another Democratic “messaging bill” that fails to become law. He repeated that sentiment to reporters off the floor.

“What I worry about is the NDAA becoming a messaging bill because there are provision after provision that stands no chance in the Senate, much less getting signed into law,” he said.

Asked if he was worried the bill won’t make it to the president’s desk, Thornberry said, “we’ll have to see.”

“You always take it a step at a time, and if this bill passes and goes to conference with the Senate, there will be wide differences,” he said ahead of Friday’s vote.

Other House Republicans are taking solace in the conference negotiations, hoping the Senate nixes the progressive provisions.

“I never thought I would say this, but I’m going to: Thank god for the Senate,” Rep. Mike Turner (R-Ohio) said on the floor.

Liberal House Democrats are looking at the impending negotiations with some trepidation.

While progressives largely ended up backing the House NDAA, they still feel burned by House Democratic leaders’ decision last month to take up a Senate-passed border aid bill backed by moderates over an alternative progressive bill with stricter rules for migrant care.

Rep. Pramila Jayapal (D-Wash.), a co-chairwoman of the progressive caucus, said she has faith in Smith to represent their interests in conference negotiations.

“We have been working with Chairman Smith, actually, for months now, over six months, through the Progressive Caucus, and he’s my next-door neighbor as you probably know in terms of districts,” Jayapal said. “So I do have some confidence that he understands how important these are and that he’s going to fight hard for that, and I hope leadership will back him on that.”

Still, she was less bullish on leadership. Pressed on if she was convinced House leaders would back Smith, Jayapal said, “I wish I was convinced of anything in the world today.”

“So no,” she added. “We got to make sure that we’re continuing to push.”

Rep. Ro Khanna (D-Calif.) is hopeful the Iran amendment he sponsored, at least, will survive. The Senate voted on a similar amendment when it considered its NDAA, which, though it failed to reach the 60 votes needed, still got a 50-40 vote.

In the House, 27 Republicans sided with Democrats to pass the Iran amendment.

“Inhofe will be surprised how many Republicans are supporting it in the House, including some of the president’s closest allies, like [Florida Rep.] Matt Gaetz,” Khanna said. “Matt Gaetz talks to the president probably a hundred times more than Inhofe does and has much more influence than Inhofe does. So I think he’s going to see there are some very influential Republicans behind this.”