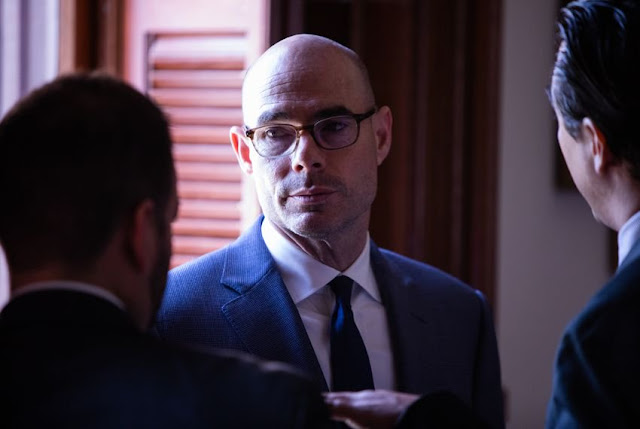 Hardline conservative activist Michael Quinn Sullivan said Wednesday he has a recording of the meeting that has shaken the Texas House of Representatives — and he is making the audio available to certain lawmakers involved in the matter.

The recording is of Sullivan visiting the office of House Speaker Dennis Bonnen on June 12. It has not been released to the public. But Sullivan, CEO of Empower Texans, says Bonnen and state Rep. Dustin Burrows, R-Lubbock, offered Sullivan's group long-denied media access to the lower chamber in exchange for politically targeting 10 GOP lawmakers. According to Sullivan, Bonnen left the room before Burrows handed over a list of 10 members for the activist's well-funded political action committee to target.

"Mr. Sullivan," Bonnen said in a statement, "release your recording. Release it in its entirety."

Bonnen has denied Sullivan's characterization of the meeting. In a statement released Monday, Bonnen said that "at no point in our conversation was Sullivan provided with a list of target Members." Burrows, who chairs the House GOP Caucus, has remained silent since Sullivan first published his allegations last week.

On Wednesday, Sullivan revealed he recorded the meeting to protect himself "from legal jeopardy" and to protect his family and Empower Texans.

"Speaker Bonnen and Rep. Burrows must recant their false claims. All of them. Immediately," Sullivan wrote Wednesday on the website Texas Scorecard, which operates under Empower Texans. "If they do not, I believe I will be obligated to release the recording — in whole or in part, I haven’t decided yet — so as to set straight the record they have tried to contort."

In an email to House Republicans the day after Sullivan's allegations surfaced, Bonnen disputed Sullivan's version of events. Sullivan said Wednesday that he will allow "Republican legislators, party officials, and conservative movement leaders who may feel they are impacted by the recording" to listen to the audio in the presence of his lawyer.

Sullivan also said he met earlier this week with Texas GOP Chair James Dickey to disclose he recorded the meeting and to encourage the party leader "to take action cleaning up the GOP's messy House." A spokesperson for Dickey confirmed to The Texas Tribune on Wednesday that Dickey met with Sullivan before heading out of town for a political meeting.

Since Sullivan first lobbed his allegations last Thursday, House Republicans have been grappling with how to handle it. Some were skeptical; Sullivan and his group have built a reputation for using sometimes controversial tactics to help carry out their agenda — both on the campaign trail and inside the state Capitol.

Others, meanwhile, have privately grown frustrated with how the speaker's office has responded to the allegations — and how Burrows, especially as caucus chair, has remained silent. Earlier this week, one House Republican, Ernest Bailes of Shepherd, formally requested Burrows to weigh in on the matter.

"The deft silence only solidifies truth within the allegations," Bailes wrote to his caucus in an email, which the Tribune obtained.