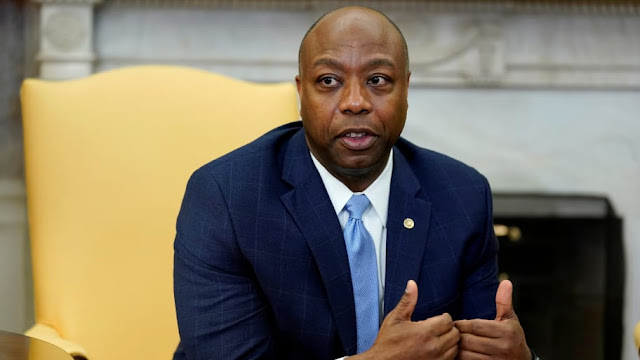 Sen. Tim Scott (R-S.C.), the only African-American Republican in the Senate, on Monday afternoon criticized President Trump for using “unacceptable” and racially offensive” language when he told four Democratic lawmakers of minority races to “go back” to the countries they came from.

“Instead of sharing how the Democratic Party’s far-left, pro-socialist policies — not to mention the hateful language some of their members have used towards law enforcement and Jews —are wrong for the future of our nation, the President interjected with unacceptable personal attacks and racially offensive language,” Scott said in a statement.

“No matter our political disagreements, aiming for the lowest common denominator will only divide our nation further,” he said.

Scott issued his statement in response to the racially charged uproar over Trump’s racially-tinged criticism of four Democratic members of the House, including Rep. Ilhan Omar (D-Minn.), a Somali immigrant, and three of her closest allies, all of whom were born in the United States.

All four women are U.S. citizens, and all four are people of color.

Trump started a firestorm of controversy Sunday when he tweeted that “’Progressive’ Democrat Congresswomen” should “go back and fix the totally broken and crime infested places from which they came.”

Rep. Will Hurd, a Republican from Texas, called Trump’s tweet “racist and xenophobic” in an interview with CNN’s Christiane Amanpour.

Sen. Lindsey Graham (R-S.C.), a staunch Trump ally, said on Fox & Friends that Trump should focus on Democratic policies instead of personal attacks.

“Aim higher,” Graham said when asked about Trump’s tweets. “They are American citizens. They won an election. Take on their policies. The bottom line is this is a diverse country.”

Scott, shortly after 2 p.m. on Tuesday, said in his statement that Democrats are also guilty of using racially divisive tactics for political gain.

“Prior to this weekend, we saw the Democratic Party embroiled in racial controversy. From [Sen.] Kamala Harris [D-Calif.] attacking Joe Biden on segregationists, to four black and brown women chastising Democratic leadership for attacking women of color,” he said, referring to criticism Omar, Ocasio-Cortez and two other lawmakers, Reps. Ayanna Pressley (Mass.) and Rashida Tlaib (Mich.) have directed at Speaker Nancy Pelosi (D-Calif.).

“It is clear the Democratic Party has serious issues along these lines,” Scott said, trying to deflect some blame to Democrats at the same time he criticized Trump’s choice of language.