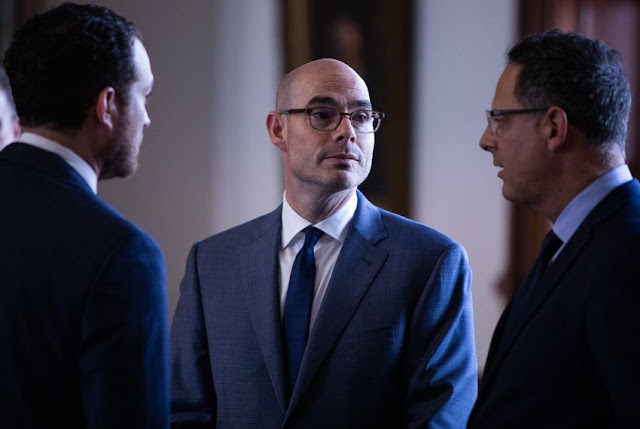 Less than three weeks after state lawmakers wrapped up their 2019 legislative session, an unusual meeting convened with unlikely conferees from opposite ends of the Texas Capitol power structure.

On one side: Republican House Speaker Dennis Bonnen and top ally Rep. Dustin Burrows, R-Lubbock, both fresh off a first session that had left lawmakers trumpeting the no-nonsense, landmark school finance and property tax legislation set to soon become law.

On the other: Michael Quinn Sullivan, a hardline conservative activist, whose Empower Texans organization had just unsuccessfully fought a number of the big measures that passed, prompting political observers to wonder whether the group’s influence within the Republican Party had hit a new low.

What happened in that June 12 meeting has become a major point of dispute, and the uncertainty surrounding it has roiled a GOP-controlled House heading into one of the most important election cycles in recent history.

On Thursday, Sullivan went public with an online post detailing his version of the story: Burrows gave Sullivan a list of 10 fellow House GOP members to target during the 2020 primary elections. In return, Texas Scorecard, an Empower Texans operation that bills itself as a news site, would receive long-denied House media credentials when the Legislature reconvenes in 2021. Sullivan linked to a letter that Bonnen sent on June 27 claiming that Sullivan, who had sent his own letter earlier that month to reject the offer, had "a misimpression of our meeting" and that no such deal had ever been on the table.

And on Friday evening, Bonnen, though he did not explicitly mention Sullivan's allegation about the 10-member list, forcefully denied Sullivan's version of the story — and recounted his version of how that meeting played out in an email sent to House Republicans that was obtained by The Texas Tribune.

According to Bonnen, the two ran into one another at a Houston airport after the legislative session ended. "I approached him and asked him what his problem was with the House." Bonnen wrote. "It was a short and curt exchange, and he asked me at that time if he could meet with me. I said 'sure.'"

Ahead of June 12, Bonnen said in his Friday email, he knew that Sullivan's long-term goal was for Texas Scorecard to receive House media credentials.

"I also knew, at the end of the day, the House Rules — not the Speaker — determine who gets media credentials," Bonnen wrote. "Frankly, I am agnostic as to whether the House ever grants them floor access or not."

Bonnen said he and Burrows, who has remained silent since the allegations surfaced, then tried to explain to Sullivan at the meeting "how important it is for his organization to not engage against House Republicans in the upcoming March primaries because of the importance of the November general election cycle."

The two House Republicans, Bonnen said, then explained to Sullivan that so long as Empower Texans is "actively involved in supporting and opposing candidates in political races, [it] will have a difficult time qualifying for media credentials under House rules."

After the meeting, Bonnen said, Sullivan sent him "a contrived letter" that detailed his version of the meeting.

"I believe this entire effort, right down to the contrived text following our airport terminal conversation, was a strategic decision on his part to bolster his legal attempts to force access to the House floor during Session, despite his open political activities, and to create further chaos among our caucus," Bonnen wrote.

At the end of the email, Bonnen told members he looked "forward to vigorously campaigning and supporting every one of you in both the upcoming primary and general elections."

The back and forth between Sullivan and Bonnen has become a major political test of a relatively new speaker who has, until now, thrived at keeping peace within the 150-member chamber he leads. Before Bonnen's email was sent to House Republicans Friday, members across the political spectrum were reeling from Sullivan's version of events — and many were left wondering how, if at all, to respond.

“At best, this piece is a piece of shit fabrication,” state Rep. Trey Martinez Fischer of San Antonio wrote to his Democratic colleagues in an email obtained by The Texas Tribune. “At worst, it is hypocritical, unbecoming and the classic ‘say one thing and do another.’”

The alleged 10-member list of targeted House Republicans seemed to cause the most confusion — and skepticism — among members. Near the end of the legislative session in May, Bonnen told reporters he would not tolerate incumbents campaigning against other House members, regardless of political party — and that there would be consequences if anyone did so. Bonnen’s stance was seen as an effort to continue the “kumbaya” session that was wrapping up — and, perhaps, a larger play to help keep the peace as bullish Democrats eyed the possibility of flipping the lower chamber in 2020.

To that end, political observers and lawmakers alike suggested Thursday and Friday that Sullivan’s story was a fabrication and just the latest in a long-running series of criticisms lobbed at Bonnen over his leadership and political style — a skepticism that increased when Sullivan took to social media Friday to say he didn’t plan to share the initial letter he sent to Bonnen and Burrows.

A majority of members on that 10-person list had spoken with Bonnen or his office by Friday afternoon, according to three people familiar with the communications who requested anonymity given the sensitive nature of the matter. If a member did speak with Bonnen or his office, those sources said, they were met with assurances that the allegations made by Sullivan were not true.

Sullivan, who didn’t return messages seeking comment, said in Thursday's post that Burrows said the list was based on who voted against a controversial proposal to ban the practice known as taxpayer-funded lobbying. If that were true, Sullivan noted in his story, a number of members were missing from the list.

Several House members noted that a number of members on it — Travis Clardy of Nacogdoches, Drew Darby of San Angelo and even Tan Parker of Flower Mound — had played key roles in the crowded speaker’s race in late 2018.

Others wondered why one representative in particular — Steve Allison of San Antonio, who replaced Bonnen’s predecessor, Joe Straus — would be on the list at all, particularly since his campaign had recently received a nearly $20,000 in-kind donation from Bonnen’s new political action committee for polling, according to a recent Texas Ethics Commission filing.

A number of House members said it was in Bonnen’s best interest to ignore Sullivan, who was a large thorn in the side of House leadership this session. In April, for example, Texas Scorecard sued the House Administration Committee’s chairman after media credentials for the group in the lower chamber were denied. The outlet, which was granted credentials in the Senate, argued its rejection was “unconstitutional viewpoint discrimination.”

For the past several election cycles, Sullivan and Empower Texans, which operates a political action committee that’s historically been filled largely with money from Midland oilman Tim Dunn, have come under fire for wading into contested Republican primaries and for using, at times, controversial tactics to carry out an ultra-conservative agenda. This session, after a damaging 2018 election cycle for Republicans and with bread-and-butter issues on the Legislature’s radar, hardline conservatives appeared to leave less of a mark than they typically have in recent sessions.

Still, as the session played out and as certain priorities championed by his wing of the party failed to gain traction in the House, Sullivan increasingly pointed the finger at Bonnen and his top lieutenants. Bonnen, meanwhile, framed Sullivan and other like-minded organizations as a faction that would never be pleased — and he “sure as hell” would not spend time trying to do so.

Democrats, for their part, were publicly mum on Friday as the ordeal continued to play out. In his email to House Democrats, Martinez Fischer highlighted Sullivan’s allegation that two Democratic members were the subject of an “amusing (if slightly vulgar)” comments by Bonnen at the June 12 meeting. Martinez Fischer urged his colleagues to raise campaign funds for the two members.

“Regardless of what happened in the Speaker’s office that day, one thing is clear: Reps. [Michelle] Beckley and [Jon] Rosenthal are targets for Speaker Bonnen and the GOP,” he wrote. “Can we raise $20,000 for each of them to show that House Democrats know how to take care of OUR own?”

Another Democrat, state Rep. Terry Canales of Edinburg, considered an ally of Bonnen’s, tweeted that Sullivan, whom he said was “still absolutely irrelevant,” was making “outlandish unverifiable claims about the leadership” in hopes of someone believing him.